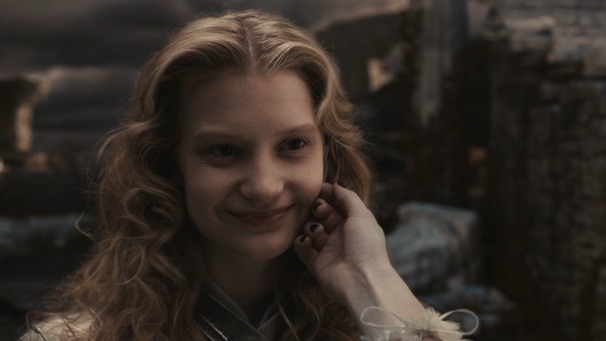 I have no idea how many times I’ve re-watched this movie. As far as I can gather, not that many a people were impressed with this Tim Burton’s take on the fairy-tale which leaves me completely baffled as to why! So maybe the CGI could have done with a few more months but it is CGI, somehow the fact that it is easy to tell with AiW makes it all the more fitting. But more so the fact that it puts things more in line with how Alice is spuer confused at first and not ready to believe that Underland is actually real. This makes me believe that the non-polished CGI was intention. I mean, the poeple who worked on it aren’t plebians, they are one of the best, if not, the best!

That being said, I thoroughly, and I mean, thoroughly enjoyed this movie! The most important reason being of course – Malice, or to you all who know not of the term – Allice/Mirana (or Mirana x Alice). Whenever these two were on screen it took me like 7 times the time to watch their scenes than it should take normally! I just can’t have enough of them.

As to why now of all these years since its release do I decide to write about it? Well, seeing as Disney gave us Maleficent only months ago, another of the retelling of some of the most famous fairy tales, and how gay it totally was (seriously, one has to be really, really innocent or completely in denial to not see it) not to mention that is is coming on Bluray in a month or so (Nov 4th), I was in the mood for more LAYERED Disney goodness.

And so I started out by re-watching that Tinkerbell movie I already posted about, and it was after that, added in with the very fresh memories from Maleficent, that I realised how awesome Disney is turning out to be. And then I remembered that movie that came out almost four years before Maleficent and not nothing could have stopped me from re-watching it again! And the gay somehow seemed even stronger this time around! It kind of hurts me to know that if this is a trend, that I have to wait for four more years for another awesome Disney LIVE movie that will most probably have a twist to it like its predecessors! But those feels were placed on hold when I finally got around to sit and follow Alice down the rabbit hole once more only to realise that I hadn’t posted about it, which frankly is Blasphemy!