God, even frikkin Nacchu is making me emotional!!

As for where these are from, the girls attended the #MUSICDAY event and I guess they performed either Majisuka Rock n Roll, Majijyo Teppen Blues or Yankee Soul, if they are adamant about keeping the original characters’ costumes.

While we are on the subject, I remembered that I have yet to write about Trouble in the Supermarket, the Majisuka Play centering on Black-san. When I get time for a re-watch, I will.

END_OF_DOCUMENT_TOKEN_TO_BE_REPLACED 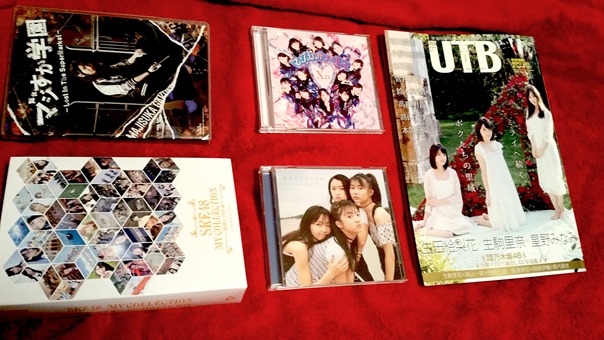 I am so happy early this year and I hope you all are too.

My New Year Swag is here which is why I am so hyper. I am still waiting on just one thing to arrive, which should have been today too but alas, don’t know what happened there, but once it does, I will share more on the contents of my purchases this time around.

Now that I remember, there is something I bought some days back that I have yet t share more about too so I will be listing that here as well. All in all, this is what I got for myself these holidays;

And the one I am waiting for to arrive is The Premium Box for TGS’s 5Tsu Movie! Yes, Finally got my hands on it! TGS Management, I love so very much! I don’t know what changed your mind, whether you listened to our whining or what, but whatever made you change your mind about making the Premium Edition available online, thank you!!! You are still the best at Fan servicing!

Anyway, I gotta run, too busy these days…

I don’t believe this! I literally have a post on Tumblr predicting Black-san (Yukirin’s Majisuka Gakuen character) having her own project as the lead and while I was talking about the anime world, this is just phenomenal!

I am so happy that I am not even going to question the decisions surrounding this theatre play (a la Gekikara and Otabe’s last year) in that we have Black…and the rest! Yukirin is a magician but even she isn’t that good! Come on, bring in other major Majisuka Gakuen characters to level things out. There are still characters left that haven’t graduated yet! Surely they aren’t planning to have Black fight the other members?!

Oh wait, maybe it will be just a drama thing! They did the fighting with Gekikara so they can do something else with Black. Surely, hopefully! But I just know that won’t be the case.

Either way, whatever happens, I am very happy! I have been crying out for the return of Black since forever, it seems, and while I don’t know why they didn’t go for a series instead of a play (How are they going to handle Black’s power without CG?!), I am happy!

Who knows, if the play is a success, maybe they will consider a series come next Winter. Then again if it is a success, they might have no more use for Yukirin and thus no more Black in the new series.

I just don’t know any more with this Organisation! Oh well, I might as well enjoy all this Yukirin we are getting lately. No need to waste the happy!

So, official details about the fourth season aren’t dropping until Jan 2 but that doesn’t mean MG is exempt from being leaked the hell out before the official announcement like any other big event. And while at first I was filled with mixed feelings, more with lack of enthusiasm, it seems that I was quick to jump overboard. I visited Stage48 and some new info has been dropped! Here is what’s up…

Yeah, like, how can I not be excited after this info dump?! And with that being said, let the speculation begin!

So, let’s start with the kinda obvious: Team Hinabe. After Team Hormone and team Fondue, I gotta say this team made it’s place within my Majisuka loving heart. Now I realise part of why MG3 really was taken with a grain of salt is that it missed all these established bases fans came to love. And WTF was up with that prison setting?!! Sense, it made none! Even for MG standards!!

But now it seems we are going back to the roots and the bases we loved a lot from before are back and one of them is Team Hinabe. So, what of those rumoured characters? Well, Kusogaki is a given! If that role doesn’t go to Ryoka, heads are gonna role! For crying out loud, she was named that officially way back when during a certain AKBINGO episode, by none other than my Anti-Goddess BLACK-san! I hear people talking about it being Shuu but I only recently just heard her being referred to as such let alone her acting all bratty like! Ryoka and co were already brats even during their Team A days. It gotta be her!

Then there’s Jisedai. That’s a hard one! There are so many Next Gen wannabes that even AKS doesn’t know who to put forward first anymore (What ever happened to the 3Ms?) Who could it be? Whoever it is, they have to be on the same wavelengths as the other cast, which might include Tani, Kaotan and Sashiko!

Yes, I am placing Sashiko in Team Hinabe because even though she is No.2, I just see her taking that kind of role, not to mention that she gives Kao-tan a run for her money in looks (heh). So if we take it the three Fuglies(DOBUSU) into account, then that makes five, with Jisedai and Kusogaki, doesn’t it? I mean, I just can’t see anyone topping those three! They are so known for it that it is almost a character trait for them now.

Then there’s the Four Queens BAKAMONO! remember the last Mechaike? No, not this latest one from last week (One I haven’t even watched yet! The lack of the Reaction Queen in a reaction dokkiri leaves me depressed) but the one with the BAKA7? Well, I am hoping against hope that the FOUR BAKAMONO are from BKA48! In case someone has forgotten, here are the members: Yukirin, Ricchan, Takamina, Sashiko, Miichan, Kojiharu, Paruru!

So, we are going back to roots, right? But surely Yasusu can’t be thinking of giving the girls who are returning the same type of roles. So then, seeing as Sashiko already has two potential places to be, let’s kind of erase her from the Antagonist and Protagonist roles. Going by the logic of using the Kamis as the leads, and in their order of power, if Sashiko is out of the running for either of these roles, then that leaves Yukirin trailing Mayuyu!

Going back to hoping that Yasusu isn’t going to Mayuyu play the villain again, what if Mayuyu is the Protagonist this time around?! What if Yukirin is the Antagonist to Mayuyu’s Protagonist?!! Getting warm yet? What if Team BLACK consists of all the BLACK-like characters in Senbatsu and beyond (Aya, Milky, Sakura, Suda etc) OMG, can you like, stop me now?! Someone? My mind is running away with itself!!!

Ahhhhhhhhhhhhhh, I am so done. My mind can’t take anymore speculation!!!