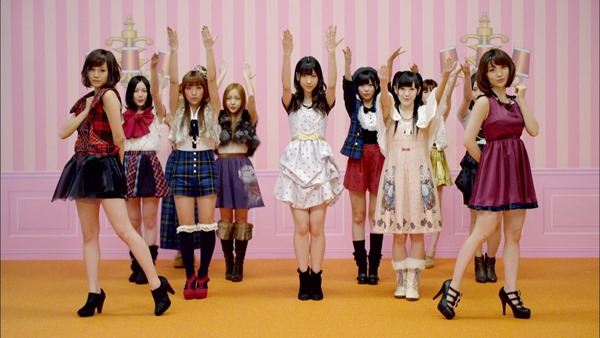 2011 will forever stay within my mind as the bested AKB year evar…until you know, Yukirin becomes centre which really, is just fantasy at this rate –_- Any way, the line-up for Senbatsu in the later part of that year after the Sousenkyou left me completely breathless! Such perfect senbatsu, especially that top triangle! Seriously look at them above there! I simply don’t see a difference between who is the Centre and who is not. Such Godly balance between Acchan, Yuko and Yukirin should never exist! No wonder it didn’t last, that was just too good a formation to last but so help me if I can’t wish for it to have gone on forever!

They could even do the triple Centre farther on or shuffle these three between singles! Seriously, look at dat Yukirin there, it’s like she was made to be in that position. I still can’t believe she did not look out of place standing there for a person who was coming from the 8th position! It’s like, she was finally home, where she belonged! Really, in those first caps she actually looks like she is the Centre of this hood man, and she might have been!

Oh well, I shall still wait for the day when Yasusu sees the light! And not just where Yukirin is concerned but also in regards to YukiRena…

This, right after that awesome BuraGeki scene in Majisuka Gakuen 2 too…>.< I swear someone or a couple of people in Japan already see the potential and are sending Yasusu signals but he is just too stubborn to pick them up! How can he not see how so made to be each other’s partners these two are?! Mechaike just sent you another clue dear Yasusu, please don’t waste it too! I don’t care if it’s not a single, I will take a drama too. In fact if it’s MG4 with these two as the leads then all that much better! You can even throw in your Next Gen pushes as supporting characters and I won’t even care, just, do something about these two already darn it!