I was literally salivating when I heard we were getting a second season of that lovely whacky drama AGE OF YOUTH! Like, talk about dreams coming true! So many things were left hanging at the end with Ye-eun and her newly developed phobia, Yi-na’s new change and most of all, these two’s changing dynamics!

I was so ready for these issues to be addressed, but then I got wind of what is happening in the second season and my first reaction was a reverse nose bleed (©Miyamae Kanako) followed by…

Let’s get the most important thing out of the way. They went and replaced our cute main character actress (well, mainest?) with someone else. And by that I mean REPLACED! Same character name but different actress playing her, like what even! Can you imagine going into season 2 blind, having loved season one, only to find that a different person is playing the exact same main character? MADNESS!

Now take that and add in the fact that arguably the best girl of season one was not returning as one of the main cast but a simple cameo!! Having gone through the trouble of getting her back to the share house at the end letting us know that she wasn’t going anywhere!! Like WTF even?! And yes, I am talking about Yi-na! Do you know what this means you all? No more great moments that pulled in crowds into this drama in the first place! Her’s and Ye-eun’s development was just thrown out the window! She was supposed to help Ye-eun get back to herself seeing as she was more in tune of what Ye-eun was going through!

But of course things do not end there! No, that would be too good! Striking a harder blow to us of the community, they went and added four, FOUR new male characters, not including the guys from season 1 BTW! Talk about having zero reasons to watch this sequel and many to stay away!

I of course will be checking out that episode in which Yi-na makes her cameo because I know it won’t disappoint!

For shame JTBC, for shame!

Oh well, thank the Lord Japan is here to heal my wounds and keep me afloat with CODE BLUE 3 which has started off on a strong note too I might add! Speaking of, see you then.

Well, what more needs to be said? Yes, yes, Age of Youth is the odd man out but damnit, I ship Yi-eun so damn hard so they are there too!

Now, I need sleep. Been up for a day and a third now putting some finishing touches on this. 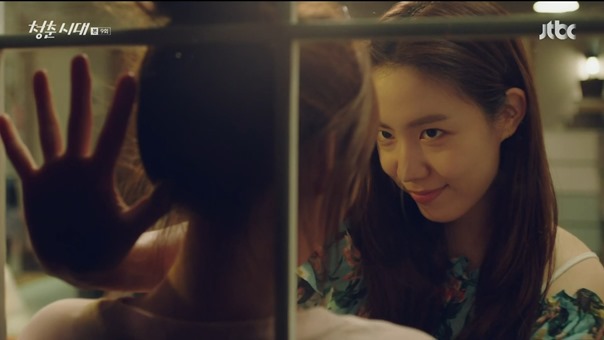 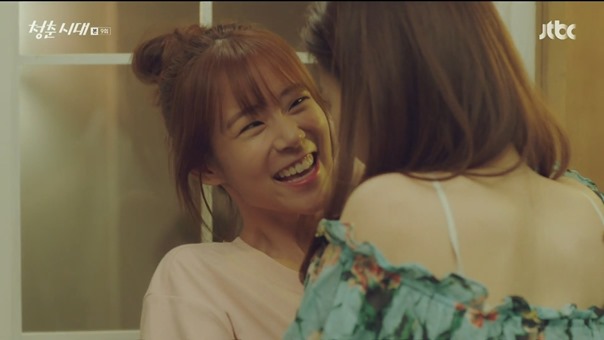 Damn you Age of Youth! How can you take such a giant step forward for the Community only to take >9000 backwards in the same episode?!

END_OF_DOCUMENT_TOKEN_TO_BE_REPLACED

Yi Na: I thank you Lord, for this bounty I am about to receive!

Ye Eun: I’m not ready. Gimme me a hug
Yi Na: Aww…Anything for you ma Baby

First Kiss so intense Ye Eun gives a cute  squeal instead of the freak-out needed.

Hwa-young (Yi Na) during the freak out LOL!

Yi Na so worried about her Baby. Not that I blame her, that Ye Eun is so adorable >.<

Speaking of Yi Na, there is something very important I forgot to mention. Ryu Hwa-young is an Ex-member of none other than my favourite Korean Idol group T-ara! You think she is hot? Well, she wasn’t even the hottest in the group. That is how awesome T-ara is, not even bragging!

She was the signature rapper of the group while still a member – a position that A-reum, also now an ex-member (FEELs all over the place I tell ya) tried to fill and she was actually doing a pretty great job. I missed her even as we had A-reum (who I had a major crush on) but with the two of them gone now, and with Dani’s membership virtually cancelled, my heart is filled with sadness.

This is because un-like most, I didn’t start out with the 6 member formation so I felt all the hits when these girls left, the girls that made up T-ara for me. Oh well, they are still covered in all bases with Hyomin still as sexy as hell, Boram being the cutest thing ever despite being over 30 now! That’s right, she is over 30. I swear that woman grows in reverse! Every member can be leader, so they can still rotate (Qri is now the leader, previously Soyeon), Eunjung can handle the rapping just fine, Soyeon’s voice is still one to beat and No Ace makes an impact at first sight like Jiyeon does!

So really, not worried but only waiting for their come-back this year. And this post just completely derailed off course, didn’t it? Oh well…