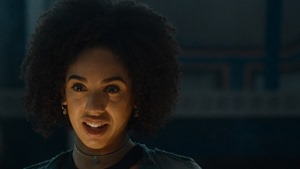 Yes, thank you Doctor Who! For, I for one know when to be thankful and this is such an occasion!

To the un-initiated, in the latest episode of Doctor Who, which cam out came out two weeks ago but you know all about time and yours truly around here – we are no one’s bitch, and that includes time too!

Anyway, in the latest episode, which was the Special for the 14th season, our companion finally made it make sense when she too, like many an companion before her, finally realised she was in love with the Doctor, well, excluding Donna and Bill because Bill had her own special Alien in Heather with who she is still travelling space and time with in their own T.A.R.D.I.S, just like, oh, that’s right, the ones before them who were Clara and Me, who too when we last saw them, they were out travelling the universe in their own time machine!

That was in the 9th season!

In other words, we have had not one, not two, but three ships since the 9th season which tots blows my mind when I think about it and I am left to wonder why no one is appreciating this!

Like, Doctor Who is a very big deal and frankly I am still shocked that we had those two but now here we are, with a third one! Three is indeed a lucky number!

Like, how can I not be appreciative!! Good luck finding a hit show that goes out of its way to give us ships in important characters like this!

Yeah sure, I am kind of counting my chickens from my egg basket as the Doctor, though she now knows, thanks to the self proclaimed Cupid, though I without him we wouldn’t have gotten anywhere with these two, I am already happy enough that they acknowledged it!

All Doctors before this have had feelings for their companions so while it was cliché to think that now that we have a female Doctor and a female companion there better be gayness, I almost thought the show would pull a reverse on us and the Doctor would fall for a male companion, even if her and Yasmin have had this electric thing going since the beginning!

Speaking of Yaz, I freakin love her. Her hair especially! Hmmm those eyebrows! Psst, don’t tell her that I fantasize about her hair wet! What?! I have a think with wet dark long hair!!! Especially them eyebrows!!

Dear BBC, an after shower scene please of her eyebrows wet? That’s all I am asking for!

Anyway,  I can’t wait for the 14th season! Things are gonna be super weirdly exciting, seeing the two of them try not to act different towards one another but failing miserably!

Yes, this is going to be a good, no, great year!