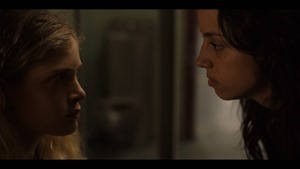 So, I didn’t know this series existed until like, now, and it is probably due to the popularity of FEAR STREET and Kiana playing the main character of that trilogy, which is why this was brought back into the wild and thus gave us (the uninitiated) the chance to get to see it!

When I was watching it I had no idea it was an old series (you know what I mean) or even the fact that there was already a second season! I have it but have yet to watch it as I did not want to lose the tingling I got from the first season that made me ship Angel (Kiana) and Minnow (Elena) like crazy!

Don’t even dare judge me, this is what I am all about! This site is named – Yuri Goggles, if you don’ know what that means, look it up! Any who, this post is all about the first season, without the knowledge of the second! Though I doubt there will be anything of significance seeing as I should have known about this series had it been worthy the mention! But who knows, maybe this is the under the 5% chance that I am wrong and it is only because no one knew about it that I see nobody talking about it!

As for the first season, what a wasted opportunity though!?! Yeah, sure it came out before Fear Street was probably even a thing but like, can you just imagine going off of the hit Fear Street and then people searching up on Kiana to watch more of her and finding out this gem where she also played a lesbian (kind of) that was in love with yet another cute blonde!!

Talk about a hype engine! I am pretty confident too that the fact that this series is showing up now so that us normies can finally know about it, is because of FEAR STREET!

But sadly, Peacock is still playing the closet game, well, at least they think they did something by randomly throwing in a kiss between some unknown characters in the background and dropping a sudden fact that one of the supporting characters was gay but it was never made anything of despite the fact that we were in a girls’ detention center, and that said girl making heart eyes at Angel like, once, during Valentine’s Day!

And we all know that once some background characters are sown as being gay, you should 100% forget about any of the main characters have some gay action! Because you have been represented, what else do you want!?!

Sad thing is that Angel and Minnow have so much chemistry that had they happened not even the Straights would have batted at eye! They had the potential! Minnow had more chemical reactions with Angel than she did with any of the boyfriends she had and what makes it even more confusing is that she did not even end up with any of the guys! And that did not even make sense! They guy she chose was actually decent and I wouldn’t have minded it if they had ended up together!

As for Angel, that flirting with the lesbian girl did not go anywhere like I said and was never mentioned again! And other than that one time there was no other indication or moment where anyone could believe they had any chemistry at all! It was so out of nowhere you just knew it was to divert us all from the building suspicions of Angel and Minnow’s closeness!

God, I was so ready to compare this ship to our other Dina (I am Not Okay With This) having to fall for a monster in that series and then a monster hunter in the upcoming Peacock series (At least I think it is a series) – THE GIRL IN THE WOODS, as Deena goes from one blonde to another (discount Elle Fanning at that! Seriously, she could be a Fanning sibling with those looks!)

Oh well, given the amount of content already on the way, I guess I shouldn’t be complaining and really, I got a ship out of this series of Angel and Minnow so all is well that ends well!

God, they were so cute!

And who knows, there is still season 2 maybe a miracle happened…