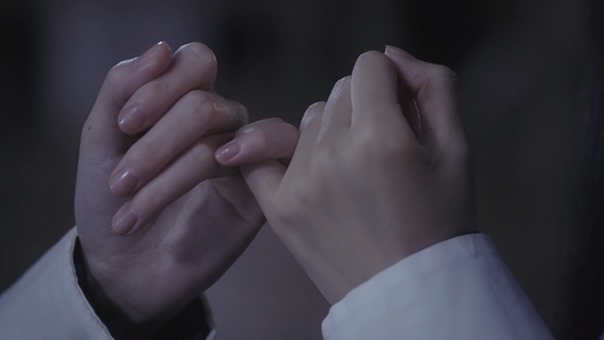 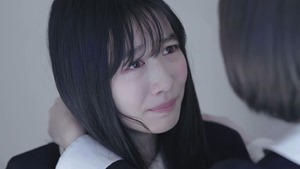 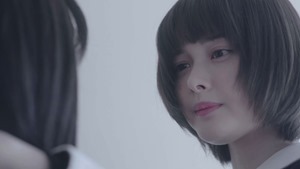 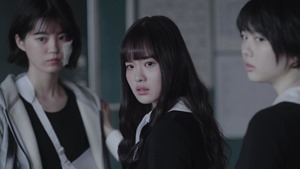 Finally, we get to see the pinkie promise from the OP!

The way they stare at each other…can’t even…!

If we don’t get a kiss in this series, a real kiss not Yuriko’s imaginary kiss, it will a crime against all humanity! At the very least Mizuki deserves it, for being so a protect towards Yuriko. Yuriko also deserves it, if only for her to know that she is loved and that the world isn’t all pain!

Though I do not see why it was needed in the first place, even though it was necessary, because Yuriko will Yuriko, Mizuki finally gets Yuriko to promise to not keep secrets from her, especially the bullying. I think Mizuki wants Yuriko to tell her about the bullying so she can do something about it because while she knows it is going on, I think she doesn’t want to do things behind Yuriko’s back as well, which is a oh you dove moment!

We do find out why Yuriko doesn’t want to tell Mizuki about the bullying, something to do with Mizuki being embarrassed of her and how weak she is. But Mizuki thinks she is strong (so do I, sometimes strength is to choose to not do something) but since she had broken the promise they had made at the beginning of the episode, she was a little angry with her but in the end her love for Yuriko won out and could do nothing but feel for her and embrace her.

As to why she was bullied this episode, apparently that bully from last episode that tried to run them over found out that someone had tempered with her bike! They for some reason thought it had been Yuriko who had done it, like use your brains you fools!

Anyway that poured more doubt on this Yuriko-sama legend and it being supernatural. Someone is indeed behind these misfortunes and since we also learn that someone was on the roof that time the eliminated Yuriko fell from it, it all points to all these being actions of someone in the school.

But, I will still keep thinking there is a bit of fantasy in all of this since our Yuriko is seemingly being shaped into the Yuriko-sama traits! I say traits because the legend is of a curse. There are good curses and as we learned, Yuriko-sama power is curses or bad omens! Yuriko is slowly turning bitter on the inside from all the bullying and she is also seemingly embracing the possibility of becoming Yuriko-sama.

The thing now will be to see if Mizuki will be the cause for her complete transformation, or the reason she does not fully transform into Yuriko-sama. Mizuki’s love and protection might keep the darkness away from her heart but things can quickly turn sideways. And there is still this air of mystery surrounding Mizuki that I just can’t put a finger on!

Speaking of Mizuki’s love, she also took the fight to the president of Yuriko-sama club and made him know to keep away from Yuriko because she will be the one to protect her! She feels so threatened it’s kind of funny! Actually she does mention that to Yuriko too telling her that it would be in her best interest to not get attached to boys in their school. We all know who she is referring to. Speaking of boys, I don’t know if it ends at the school or it is like that in that world but guys are considered lesser than the girls! Remember that YuiYui led Majisuka series we all never finished, think of the students there and it is kind of the same here, even though they don’t go walking around with their heads down!

As for that scene with Yuriko-sama and Mizuki, turns out they are not some old friends or acquaintances. In fact the scene ends in Yuriko-sama threatening Mizuki. Yeah, I know how it looks like but the truth wouldn’t be any further from what we all thought was going on! And yet how did Mizuki react to this threat? She instead made Yuriko dress up like Yuriko-sama, totally calling her bluff! But in doing so she has also placed Yuriko in the line of fire since she is now considered a candidate for the new Yuriko-sama!

Things are now pretty much streamlined with just some little things left to tackle, like that stalker guy in Yuriko’s class! We still don’t know what his deal is. Then there is this mysterious side of Mizuki that I am getting small titbits of clues with every passing episode. What is her in this Yuriko-sama matter?! I am thinking she is just using the play as cover to find out something about the legend but heh, that’s just me.

Anyway, I will keep my eyes peeled until the very end so until next episode…