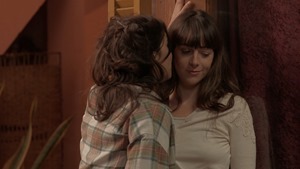 Viola, is an indie, not quite feature film but neither is it a short film, about a group of actors who are doing the Twelfth Night play from William Shakespeare’s catalogue!

At 65min, just 5 minutes over an hour, it is nothing to write home about but just like most great short films, not a minute is wasted and you will find yourself watching this hour over and over again, especially the relevant minutes!

You what I mean when I say ‘relevant’, I mean of course the gayness! Viola, the stupidly hot woman with some of the most perfect eyes I have ever seen (Alexis Bledel, Lucy Lawless, Alessandra Torresani and Alexandra Daddario fall in this category), is in a kind of relationship that is not approved by anyone and her co-workers conspire to set her up with a much more worthy partner. The master planner is Cecilia, who in the act of carrying out her plan, inevitably ends up falling for Viola and thus replacing the someone worthy by herself!

But of course it is the journey that is more interesting and this fall happens during their long practice alone, both being the two main characters and that it would make sense to practice off of each other! So, one day when they stay behind to go over their lines, things don’t end up according to plan!

Even more shocking was the fact that they had like, 15 lines at most which they kept repeating and repeating over and over for all those minutes! But, don’t let the nagging fool you! Those were the most intense minutes I have ever watched! You could see the tension rising and the gayness gaining and by the time Viola finally caves into the temptation, which by the way is pure Shakespeare!!! Everyone is on the same page!

Seriously, this short feature film (short feature is the term I was looking for) deserved at least a few awards! It will be a crime if it did not win any! Also, this might be my first ever Argentinian movie I seen in my life! So, kudos to Argentina!