Before she was making out with dead gypsy Grannies…

In Drag Me To hell, and before she lost the role of Lois Lane in Zack Snyder’s Man Of Steel to Amy Adams, Alison Lohman was making out with Alice! 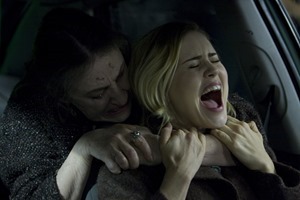 Alison in Sam Raimi’s Drag Me To Hell

To say that I was surprised when I came upon this movie would be a complete and utter understatement! Not only did I just find out about it years later after Drag Me To Hell, something that shouldn’t have happened given that I was completely smote with Alison after said movie, the fact that she was making out with Alice shocked me so much I still can’t comprehend it!

It’s probably because it is Alice…The Alice!! And by that I mean Alice in Wonderland, Alice! Like, I know that isn’t the real Alice but I just can’t handle it knowing that she made out with Alice from Wonderland!!!!

Understandably Karen is smacked silly with love/lust upon seeing her because this Alice is what legends are build upon! She is a living breathing Alice from Wonderland! I am not sure if Vince (Collin) knew what was up and had conspired for this meeting (It is accidental in the book) but he seems to see it, the attraction that Karen instantly develops for Alice to the point of inviting Alice over one night to his place where he was supposed to be giving his side of the story to Karen!

He instead gets her super high (per her agreement) and to say that the night got super sparked would not be making it justice! It was no hallucination however! Alice was indeed there in that house, totally sober, totally flirted, kissed, fondled and went down on Karen so hard I blew a nose blood vessel!

Here once again the movie outdoes the book because in the book Karen and Vince made out so much it was even more than what Karen and Lanny (Kevin) in the movie. It was a lot of making out and Karen had it bad for Lanny. In the book it’s almost the opposite! She grew feelings for Vince and they went on a lot of dates, dates that included a lot of sexing in public!

God, I still can’t believe someone made out with Alice! What a magical thing movies are, eh!!

But enough teasing, here you all go…

2 thoughts on “Where The Truth Lies [Movie]”