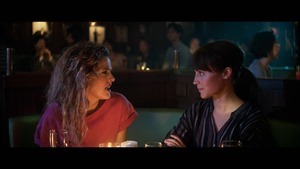 Alicia Vikander having gay dreams about snogging Riley Keough?! Sign me the F up! 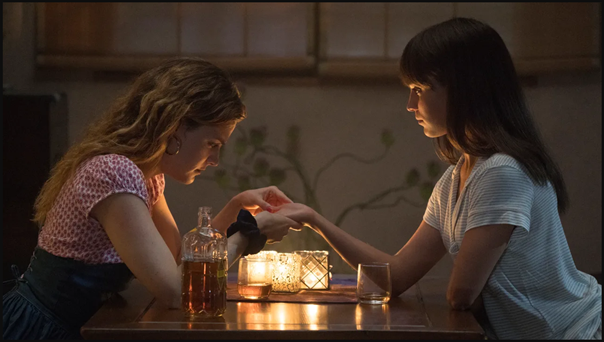 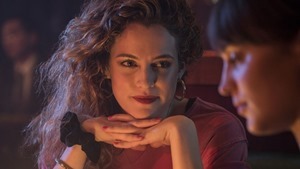 So anyway, this movie came out last year and indeed I watched it last year so my memory is a little fuzzy but I remember not liking it because of some stupid things it was pulling!

Was Lucy (Alicia) mentally unstable? Was Lily and Dick messing with her? Was Lily actually real or just a figment of Lucy’s imagination?! Was Dick actually a serial killer and Lily one of his victims?!

The movie tries to make all these views tangible and hope that someone will take away at least one of these from the movie but everything is all so half-assed you gotta thank the gods that there is a novel which has to explain this mess! No, I have yet to read the novel but I am planning to. I doubt the book is as incomprehensible as the movie but really, if even Netflix can’t get as close to the source as possible, who can?

As for me, I decided to go my own route! My route which is that Lucy isn’t mentally sick but rather, kind of a little broken up from her childhood trauma, which is vaguely explained but anyone with a brain will understand. You see, she lives with this belief that she is the bringer of death and people falling dead all around her doesn’t help the situation any.

And so by the time we meet her, she is already haunted and you see it in her face! He has probably not gotten close to anyone since she was young, until she bumps into one Lily (Riley) and from her, she begins to get close to people.

Obviously, she falls for Lily, hard, but Lily’s friend warns her to be careful with Lily, in that she knows how to get to people and make them love her only to diss them for someone else! But by the time this warning is given, it is too late, Lucy is already hooked onto Lily to the point of already having sweet dreams about her. Later still because Dick is already caught sight on Lily and to Lucy’, it looks like Lily has moved onto Dick from her which of course is a good place to show us some green-eyed Lucy!

But what Lucy does not know is that Dick is a serial killer, who poses as a photographer but really, all he gets off on is the fear in the faces of his victims before they die! What Lucy does not know is that Lily actually came into her life at the right time because Dick the Serial Killer shifted his attention from her and onto Lily. It did help too that Lucy was like a walking zombie so maybe Dick didn’t see the pleasure he would get from killing her seeing as she already walked around like she was death! Actually that explains his attraction to her that is not as deadly as the other girls!

So while Lucy’s love and jealousy for Lily grows out of control, she is blinded to the actual happenings in that Lily is being manipulated by Dick like he did all those other victims of his and that Lily has no choice but to be with him. At one point Lily risks all by confiding in Lucy, at least she tries but Lucy is far gone that she sends Lily away from her door and refuses to listen to her despite the desperation and fear she shows!

But at least Lucy gets her wits about her and suspicions about Dick start to grow but when she finds out the truth, it is already too late because when she finds Dick’s stash, Lily is already among the photos and that can only mean one thing! She is of course dead!

Lucy in the end takes the photos to the police and gets Dick arrested and as far as  I am concerned, Lucy was more in love with Lily more than she was with him. While they did make out all that other stuff, it was obvious from the very beginning that their relationship was a volatile one! Lucy was afraid of him the whole time but he was the only one she got so she decided to be blind to all the signs.

It wasn’t until Lily came into the picture that Lucy started to see straight (poor choice of words?) and after that, every time she got jealous it wasn’t for Dick but rather Lily! She found Lily first! Lily was hers! Lily should have loved her not him! She felt betrayed when Lily was him but she did not know that Lily was under Dick’s control. All the other victims had one thing in common, fear in their faces whenever Dick took photos of them. When Lily tried to warn her she dismissed it because love made her blind.

Anyway, it matters not whether it was real or not, the end result is that Alicia Vikander made out with Riley Keough and that is the holy grail I am taking away from this movie!

Now, if you will excuse me, I will go order that book with a gas mask in tow!