Thoroughbreds – a movie that is like the original 30’s but with the main character gender-bent to female, added a touch of psycho-chaos, cut down the horse story majorly and sprinkled in a bit of scrumptious subtext.

You know what that means… 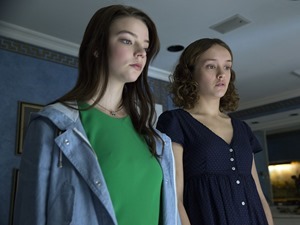 I just could not resist!

I had absolutely no expectations from this movie! First of all these are Anya and Olivia we are talking about here. Chances of seeing them making out are below .01. I mean there was that one time with Kristen Stewart and Dakota Fanning but that was like, eight years ago! There is no way we can see upcoming actresses in controversial roles these days. Then again there is a certain movie coming out with Chloe Grace (but is it still her time?)

Anyway, Thoroughbreds is like a well of Fan Fiction! This movie would have been perfect had it come out a few years back because I can guarantee the amount of fiction for it would be TV levels in volume! Lily and Amanda are like the perfect characters for writers to go crazy with. Their story left so much to be explored. Their characters perfect for fiction!

By that I mean that on one hand we have our main girl Lily (Anya), she is basically a sheltered virgin, has a ‘personality’ and is so full of supressed emotions, mostly due to her Step Dad but her Mom doesn’t seem to help matters (even though there is a blank there in who is at fault, Lily or her Mom).

Lily is practically the opposite of Amanda – her childhood and best friend. Amanda is…. weird. It seems she has a condition, don’t know if it is physical or psychological but she is basically emotionless. She feels nothing. All the emotions she puts on are just imitations.

Think of those character traits dear Readers! Do you see the possibilities?! Do you see the amount of stories that can be told about the two just from exploring their characteristics?! I can almost taste them; Like a story where Lily does some experiments to see if Amanda really is emotionless! And what are the most intense emotions that can’t easily be hid?

Or a story that tackles the ending better, either by changing it completely or adding on something more. It’s probably early and you might not know what I am talking about without seeing the movie but for example; changing the ending where Lily decides to stay in Amanda’s arms until the police get there and either arrest them both or decides not to go with the original plan. Or adding something like Amanda faking being asleep and thus seeing how much Lily cared about her. Or a twist where we find out that Amanda does actually have feelings and they come out because of something Lily does.

Yeah, just jumped ship but this is not new about me (sorry new readers >.<).

So anyway, the story goes that Lily and Amanda finally get reunited since childhood, which is because Amanda’s Mom asked Lily’s Mom if Lily could tutor Amanda. They are both different now, or Amanda is different since she doesn’t pretend anymore. Her weird behaviour freaks Lily out and this brings some great scenes between them when Amanda tries the humane things while Lily is terribly terrified of her. Examples include the wonderful awkward hug and the tutor lessons where we Amanda studies a uncomfortable Lily like she was a fascinating piece of art or something.

Amanda coming into Lily’s life sees the state of things and drops a line that is to change their lives forever. She suggests that Lily kill her Step Dad (Lily really hated him). And so the majority of the movie is basically about this! But thankfully they don’t forget about Amanda and Lily’s relationship development. Their relationship and the main story go hand in hand. One side drives the other because without one, the other is pointless!

Amanda’s lack of empathy and restraint is what makes her able to suggest the killing oh Lily’s Step Dad. Which leads to them having a falling out and thus forcing Lily to finally voice her real feelings about Amanda’s weirdness, something that would have stayed between them forever and left a barrier. Meanwhile Lily knowing what Amanda is tries to get her, use her, in the act of killing her Step Dad. That is also another thread to explore about Lily’s troubling feelings for Amanda. Would she really do that to Amanda? Which of course means we have to get elements that put that thought to the test by giving us scenes which support and also are against this with Amanda’s actions towards Lily.

Oh yeah, late disclaimer but Lily and Amanda are no crazy lesbians!

Speaking of which, these two have no boyfriends or love interests of any kind. I mean I was worried about that guy from the trailers but he turned out to not be anything to worry about. Hell, Amanda was manlier than him! Nay, she was the absolute best!

That is where I feel like the movie let me down a bit. I wanted them to touch upon Amanda’s apparent lack of emotions later. It seemed like it was a major plot point, but I guess they had second thoughts. I wonder if there’s deleted scenes!

Another major point for this movie is the fact that it takes its time with scenes. I love movies like that. They give you a feeling of anticipation that something is about to happen, which is where most of my excitement stems from. We need more movies that let scenes breathe, not tampered by noise but with just the characters and their emotions.

As for the yuri, other than the cute moments the two shared, lack of boyfriends and love interests, the only substance we have is subtext. This is why I said this movie should have released a few years back. There is so much potential here.

But with my yuri goggles on, this is going to my collection because that climax killed me! By that I mean when Lily finally killed the Step Dad. I really loved that scene! The fact that Lily came clean about her plan to put Amanda to sleep and frame her for her Step Dad’s murder. The fact that Amanda not only forgave her but that she agreed to do it anyway, finally giving her life a purpose (Lily had said to her before that she did not live, that she just was). Then the scene after the deed, where Lily finally cried, at the prospect of what she was about to do to Amanda, and wrapping a sleeping Amanda’s arms around her blood covered self as she sobbed terribly….

Amanda all but won the cool game with that one! If Lily was to fall in love with anyone, that was it right there!

Speaking of Fiction too, another good one would be one set in the future when Amanda is released from prison, comes back to a some what stable Lily’s life only to fuck it up with those buried emotions being re-awoken within Lily.

That’s it, I am off to FF.net, Femslash Journal and AoOO.org to see if someone delivered.