So, I mentioned that a certain version of The Handmaiden was on the way, well, it’s here and dear Readers, is it grande!!!

Germany went all commando on this one! Not only did they pack a full 5 Discs into the box (BD and DVD versions of the Theatrical and Extended cuts of the movie, and an Extras DVD), but they also managed to pack in the condensed version of the photobook that got released first all those months ago last year! In addition to all that goodness, they also included some cards!

For now, they are the winners but the only reason that they won over Korea was because they had the Blurays, which the Korean version did not have. But that means that Korea will be releasing a Blu-ray version and are probably leaving it up to Plain Archive! You know that release is gonna be bananas!

The Germany version did not win because of the extras because I already own a bigger version of the PB while Korea gave us a completely different PB with their Boxset. France too has a win though, for being the first one to give us a Blu-ray of the Extended Version!

Up next is the English Blu-ray coming in two months! Sadly I do not think that is going to be winning any awards, only if it has extras that are translated. Be it only the Commentary of the Extended Version or the making ofs, whatever they have translated will see a win for them. Really, they better have them translated, otherwise I am giving them a minus for taking so long to release the BDs when they aren’t doing anything productive for it!

Any way, that’s that. Jump over for more photos of this lovely Boxset of The Handmaiden from Germany… 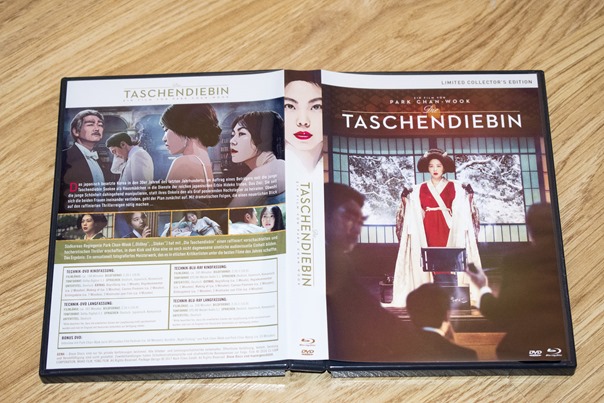