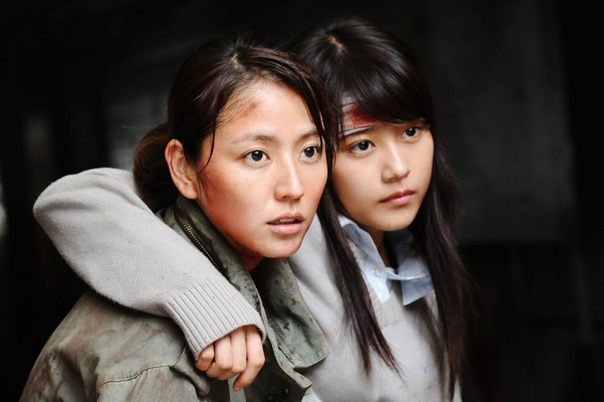 I am a Hero アイアムアヒーロー

So, there is this zombie apocalypse movie (yes, another one) that recently came out from Japan that got my goggles re-assessed to find out if they are still doing their job right! It has occurred to me that I have been posting about a lot of legit yuri that doesn’t require goggles at all so I figured they needed some re-calibration!

Who am I kidding, the only reason I got this movie was because Nagasawa-kun was in it along with Kasumi-chan. Also the fact that it is a horror movie. Horror is my favourite genre after all, until yuri is made an official genre that can have award nominations that is. And so I went and checked it out.

The movie seems to be based off of a Manga but I am not going to go checking it out, unless someone who has read it tells me otherwise. Movies usually take liberties and in this case I can tell that I would regret checking out that manga so I am going to stick with the movie, thank you very much.

Nagasawa Masami plays Yabu, a woman who used to be a nurse that feels regret at her earlier actions when the breakout first happened. She ran away saving only her self and no one else. Arimura Kasumi on the other hand plays Hiromi, a high school girl that runs into our protag and redeems him and Yabu along the way, while she on the other hand was turning less and less human. We don’t run into Yabu until a bit later into the movie when Hiromi is already turned!

Basically the movie is about a breakout and then surviving in the post-apocalyptic world. There are many mysteries left to solve, which are really making me want to go read that Manga but I am going to resist! No matter how much I want to know the fate of Hiromi and her powers, or how the relationships progress, I am going to resist! Let’s just stick to the movie…

Looks like I don’t need goggles for this movie after all! That’s right, those two are zombies and they are walking while holding hands and leaning on one another! Since the zombies in this movie seem to be locked in what was most meaningful to them while they were alive, like that scary-ass mofo of a final boss with his love for high jumping, or the Antag who wanted nothing but to have sex with Yabu and that carried into his dead-life.

if those to girls are like that as zombies, there is no need for over-thinking things. They were an item! And it is not that they died that way meaning that they are stuck like that forever. No, you can clearly see them separating the last time we see them when they are going to feed, meaning that they can separate to eat and then move on ahead hand in hand, forever like that, well, until someone blasts their heads off.

Interestingly, it was around this area and this time that the Protagonist and Hiromi ran into Yabu! Coincidence? I would like to think not! But while that is all well and good, the couple that let me stick around until the end was of course Yabu and Hiromi. Why was I so drawn to them when any other sane person would just jump onto the harem bandwagon? Well, first off, there is this scene that I just couldn’t help laughing at because it reminded me of something…

Anything come to mind? No? How about this little video to help jog your memory then?

Seriously, we need to talk about that anime! Chikane and Himeko were my Anime OTP before 2011 when superior despair descended upon us in the form of cute magical girls and I got to meet Homucifer and Godoka! Actually now that I think about it, all four are deities albeit of different cultures but really, almost everyone knows of ‘God’ and ‘Devil’ but in the context of the whole world, only a small proportion knows of a Sun god or a Moon god. So I guess MadoHomu win any way!

But I am getting side-tracked here as the story usually goes. Getting back to the point at hand…

First off I have to say that if they had gone with some romance shenanigans between either Hiromi or Yabu with the Protag, this movie would so be forgotten about already and this post would never have been born! Why? because that would not have worked at all! I am sure were this a Hollywood movie, they would not have let that chance go.

First off the Protag already had a girlfriend before the world went to shit but even then their life was no fun at all. This was down to the character of the Protag. He was a loser,to put it simply. That of course is a positive thing for the movie because for once we actually got a ‘human’ character! He was so flawed but oh so human. So why did this not work? Because the other characters were not so human! They were still characters in a fictional world. So there was incompatibility there.

Now, of course over the course of the movie the Protag changed and by the end of the movie he would have been worth a try in a relationship but by then the damage had already been done! Both Yabu and Hiromi had already seen his lowest, especially Hiromi! I for one actually blame him for more than what Hiromi probably is, and that for letting the Antag shoot an arrow right into her bran and thus turning her back into a vegetable! I blame him for also denying us the audience a badass final boss battle between badass Hiromi and that…that…

That moment when you know you’re royally screwed!

Seriously, that Mofo was scary as all hell! Best Zombie villain I have seen in a while. Anyway, I was looking forward to the fight between him and Hiromi but we did not get it because Hiromi was still recovering from the arrow to the head and could barely even stand on her own! You see, before the arrow she actually had developed some kind of power that she had gotten from partially being zombified! Which means that Yabu did not even get to witness her awesomeness and fall head over heels for her but I don’t think that was even necessary!

So, the Protag totally lost points for even being considered in a relationship with Hiromi, barring the age difference but it is rarely a problem in romance stories so  I don’t count it as an obstacle. he had the choice of shooting the Antag before he shot Hiromi but the Dude peed his pants and let Hiromi be hit! he did not even know that she could survive that! She could have died! Totally lost his chance with that!

Interestingly, after that bad decision, it was then up to Yabu to pick up the slack and start redeeming herself! First off this is the zombie apocalypse! No one is responsible for anyone but themselves! Yabu we know has already abandoned others in order to survive! And those were people that she knew! yet, here we have a girl she barely knows and yet…and yet…

Despite the fact that the situation she had found herself in could only be survived if you were alone, Yabu decided to put her life on the line in order to save Hiromi! The girl was already half-dead to anyone and yet despite not having the stamina of a man, she dragged Hiromi down that ladder, an action so hard it is actually harder because of the fact that she had to be extra cautious with all the enemies about them. And even when she reached the ground she was hauling Hiromi on her back running away from enemies like they were family or something!

Even during the final battle it seemed that Yabu was a self-professed protector of Hiromi and I can’t seem them being inseparable ever again after this. In fact I think that Yabu will take it as her self-reflection protecting Hiromi in place of all those patients and friends she left behind during the fallout due to her being so weak.

What I would have loved to see is her reaction to seeing Hiromi kicking zombie butts and how her feelings for her would change then and how they would change, seeing as she already cares for Hiromi.

And what of that ending? Others probably didn’t think much if anything of it but that seating decision couldn’t escape the eyes of yours truly! Seriously, the best decision would have been to have Hiromi in the back seat and let her lay down. Since she is not so active, the back seat would have been safer for her in the case of something going down but nope! Yabu did not want her out of sight and had her sit in the passenger seat next to her.

And really, since the arrow to the head, it seemed like Protag-kun gave up his right to be with Hiromi since we did not see them have a moment after that despite starting out strong when Hiromi was still human, even soon after she turned in-human. So that romance route is blocked! Meanwhile Yabu will not soon forget the lowest she had seen Protag-kun even if by the end he kind of looked a bit cool.

So, interestingly, the future seems much more interesting at this point to me. I hope ‘I am a Hero’ is one of those latest trends in Japanese Movies where they come in parts. I want to see Badass Hiromi again and what happens with her and Yabu later. It seemed like the first half of the movie was a Protag/Hiromi and the last half a Yabu/Hiromi but while the former failed, more than once actually, first Hiromi turning into a zombie and then Protag letting her be shot in the head, while the latter prevailed but Yabu redeeming herself when she risks her life protecting Hiromi!

yep, Goggle are still functioning! Experiment is a success!

be seeing you around y all!