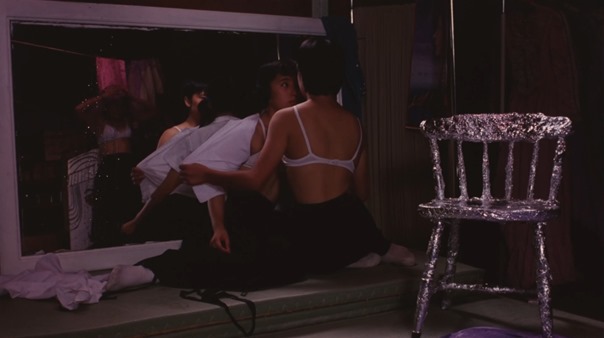 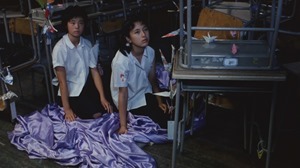 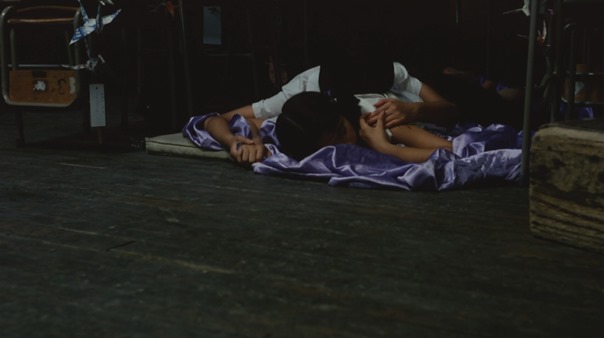 So, remember when I said I would be talking about a few gems from old Japanese cinema? Well, yesterday, being a Sunday (a day that makes you want to re-watch everything!) one of the few videos I managed to watch was a movie that released all the way back in 1985 and directed by Soumai Shinji – Taifu Club (Typhoon Club)! I think it won like seven awards so it has to be good, right? Well, the fact that I was watching it for the fourth time yesterday proves that it is indeed good!

Now, I am sure that most will find this boring. It is one of those movies that don’t have BGM, that seemingly spend time on scenes that most movies would do without – scenes that go on way longer than necessary. But I totally love these kinds of movies! Most movies in my Japanese collection have this vibe about them (Strawberry Shortcake, Blue, End of Puberty, etc.). It is such in fact that I can’t explain the story because despite having subs and having watched it four times by now I’m still lost at the plot of this movie!

It is titled Typhoon Club but that title like 10% relevant because said typhoon happens at the end of the movie and there is nothing like a club in school that deals in typhoons or anything like that. It just so happened that classmates got trapped in school when the typhoon hit and spent the night there. This was during the last 30 or less minutes of a 2hr movie. The rest of the movie was just following a bunch of high school students in their daily lives. 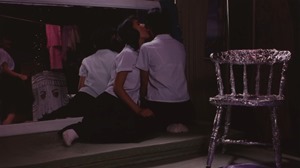 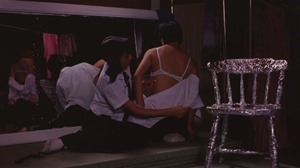 So, why am I mentioning this movie in the first place? Well, that is of course because it has yuri in it! Two female classmates are in a relationship. And by that I mean that they did make out quite a few times! The girls are Yumi and Yasuko. We first see them making out in secret after classes when they get caught by a boy! Yasuko threatens him saying that if he dared outed them to anyone, she would kill him but alas, even as a pussy as he was he still talked to his two friends. Good thing that they didn’t act like idiots and start spreading the info or bully the girls. In fact they did not mention it ever again but I doubt that it would have mattered anyway because Yumi and Yasuko have a friend, Midori, who is totally okay with them making out while she is dancing close-by, naked!

This was the yuri couple of the movie but apart from them, there was a hidden WTF moment in there that for some reason I totally missed the first time I was watching the movie! 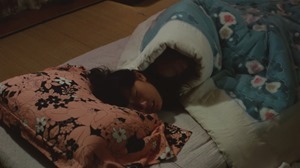 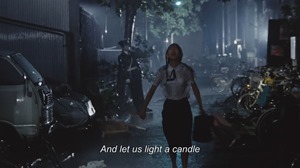 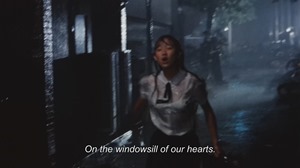 Another of the main cast (If not the main, since she dominates the cover) named Rie seemed like she was the straightest girl especially as the movie starts. She is friends with one of the main Boys with whom she walks to school together and he is that kind of character, the cool one that all the girls want of course. He looked like he had his shit together with his life planned out, well until the end when he took his own life so that the others could cherish and learn how to live apparently. Interestingly we learn later that they are just friends and that the Boy instead is in love with a different girl! Speaking of this girl, she had a great deal of her shared drama. Sure all characters had their drama but hers was too intense. There is this other Boy that lusts after her who literally poured chemicals down her shirt as a way to brand her. Later he even tried to rape her but then he saw the scar on her back and he went into a fit. Karma – that is how it works.

Anyway, Rie did this thing that totally shocked me! I had to watch that movie three times to get what I was seeing and what being implied through my thick-headed skull! If you don’t see it when you get the chance to watch this movie, I won’t blame you. One of the times she walks to school with the childhood friend, she mentions how her mother was bugging at her which was why she was late that time. This gave me an impression that she and her mother was not on very great terms.

Another morning the Boy comes to pick her up so that they could walk to school together. Rie was still asleep when he arrived so even as she tried to get dressed, there was no way she would have made it on time. She gives up and lets him go by himself and instead stays in and decides to be late. The question then is that what does she do after giving up on getting to school on time?

Well, Rie walks around the house, skirt forgotten as she wanders in her underwear. She searches for her mother but she is not in the house. Rie goes to her Mother’s room and sits on her mirror desk where she begins to brush her hair. Doing so, her eyes glance towards her Mother’s Futon (Beddings) on the floor and she pauses. After some time she gets up from the chair and moves over to the futon and gets under the covers.

At first, and I am sure many will have the same impression even after multiple times of watching, but I thought that the way she cried out her Mother’s name was because she missed her terribly, and that the way she was playing with her Mother’s beddings, as a way to get that Motherly comfort she never gets because her mother is never home (I think) was the only way she could think of. That was what I thought at first – That she was just a girl crying out for a mother’s comfort and attention.

Then I watched it two more times and I saw it!

If you don’t know or never saw how girls t-um-relieve their itch, you will be hard-pressed to see what is going on in this scene but fear not, yours truly is here to shed the light! First clue is that when Rie gets under the covers, she begins moving under the covers restlessly, then she takes of her top! She was not wearing a bra by the way – I was paying attention! Why did she need to take it off?! She had absolutely no reason to especially seeing as it was just an under blouse, those flimsy ones wore over the bra and under the shirt to hide the bra-lines (only this time Rie had no bra). That is the first clue!

The next is one that only those familiar with the action of self-relief will understand. To put it blandly – Rie starts touching herself right there in her mother’s beddings, all the while crying out ‘Okaa-san’ (Mother).

I kid you not!

Also like I mentioned her friend committed suicide later towards the end but before he did he mentioned how Rie had gone crazy thus putting more weight on my findings.

Sadly Rie’s situation with her Mom was not followed upon on anymore which was really baffling! All we got was that she ran away from home after that. It left you questioning what you just saw and even I – a being I myself consider deranged and without bounds was left doubting that what I was seeing was what I thought was actually happening! Probably everyone that watched this movie once didn’t even think of the possibility! If you watched this movie once, watch it again and pay attention to that scene. Watch the scene two more times, closely, and come and let me know what you think afterwards.

Seriously, I was really surprised by that scene, and this is a person that has seen some weird things! The movie itself makes things hard because you can’t tell if it is a weird movie or if it is just so realistic. Like that last scene where the students dance in the typhoon rain all naked! That can happen, I can do it myself too, or rather I could when I was still in high school, so it isn’t that strange!

Anyway, the point to this post was that there have been yuri projects since way back and they cut no corners so I find it strange that Japan today is so timid when it comes to things like that. Why? Other countries that were strict on morals are getting better so why is Japan moving in the opposite direction?

Anyway, yeah. There is another movie that I will talk about that is actually older than this one. But for now, have a good day you all and may the yuri be with you!