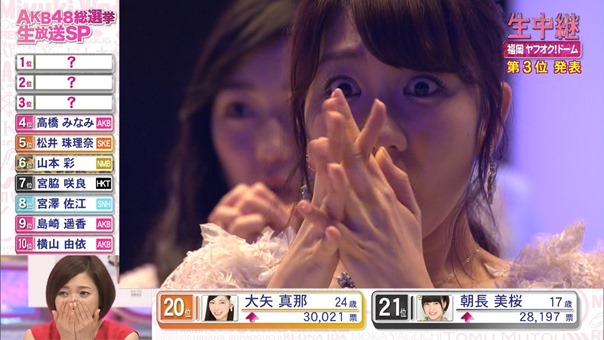 When Mayuyu was called for 3rd! 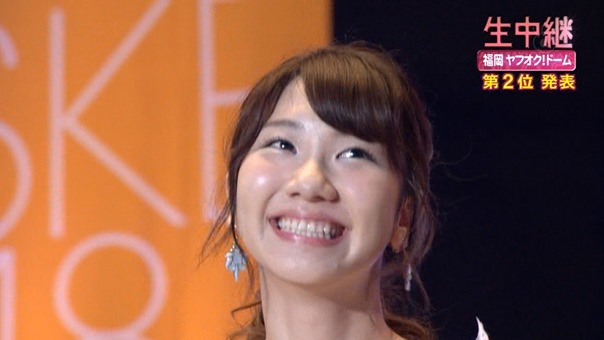 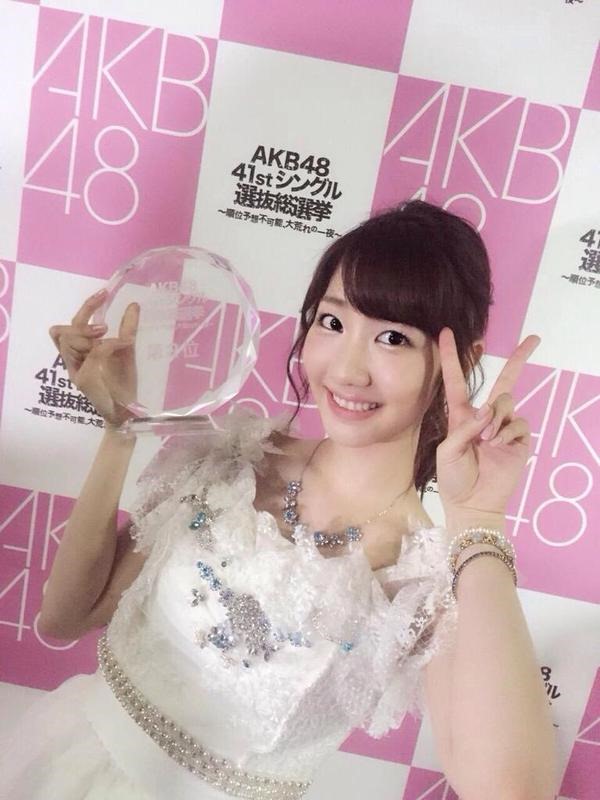 So, the battle is over! Probably this will be my last time feeling like this every year! Yukirin did not get that No.1 (Sashiko game too strong yo) but at least she got to see a different view and it was upwards not downwards! I call this success! Thank you all who voted and those who contributed, we showed that we are still alive and hopefully this will show those up there that Yukirin should not be ignored anymore!

I will talk more about this when I watch the recorded show but I will just say now that some things happened that just stole some fun from this, namely Maachun and Sayaya to mention but a few. If Yukirin won I would be outside right now getting drunk (even if I don’t drink) but still, that moment when Mayuyu was called before her…I think my heartbeat caused an earthquake somewhere on earth! That moment was just so delicious I will always remember it! And Mayuyu looking like that, I don’t think I have ever seen her so happy to lose! She really was supporting Mamarin.

No.2, A different view so I think we did great all Yukirinians! 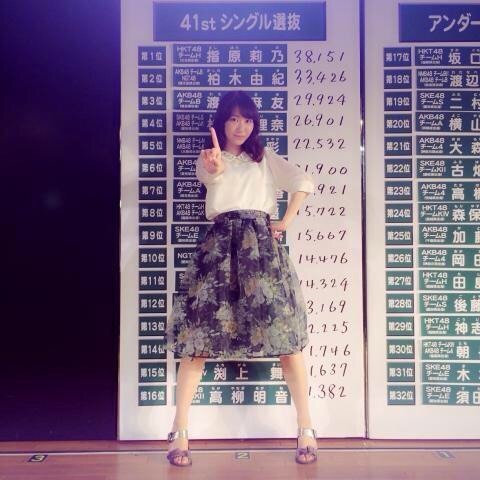 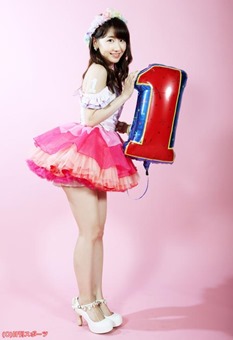 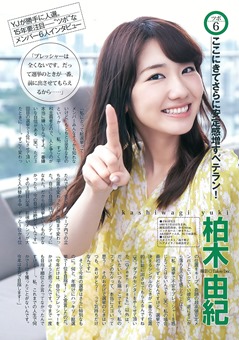 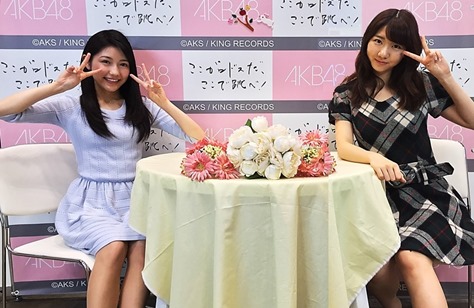 Only hours, merely hours to go until the AKB Elections! After this post I’m going straight to bed so I can watch the whole thing with all the energy I can muster! I’m so excited for tomorrow! I have never been this excited for the elections before! Usually it happens when we hit the Kami 7 and around the 4th mark but this is during the event itself. I have never been excited before the event before! So excited!

Whatever rank it is, I know I say this a lot, but whatever rank Yukirin gets I won’t cry about it! I won’t be frustrated and that is because I have done all I know I could ever do! I will thus have no regrets whichever rank she ends up getting but for now, I have nothing but the top in my head! I hope AKS has that cowl in Black instead of Red because this is Yukirin’s year!

Strange that, huh? Getting worst luck ranking for the year and yet we have never seen Yukirin so happy and so alive like she has been so far this year! Everyone has noticed her! The younger members are all over her, the media is talking about Yukirin this and Yukirin that these past few weeks, seriously, how many shows has she been in these weeks and so much screen time too. It’s already Yukirin’s year, even if she doesn’t get to be No.1, this is already Yukirin’s year. Yasusu already mentioned having Yukirin’s new solo song ready so we can expect a new single this year. Yukirin herself already mentioned doing a lot of things she did not get to do last year so maybe a 4th solo LIVE? Either way this year is gonna be Boss!

END_OF_DOCUMENT_TOKEN_TO_BE_REPLACED 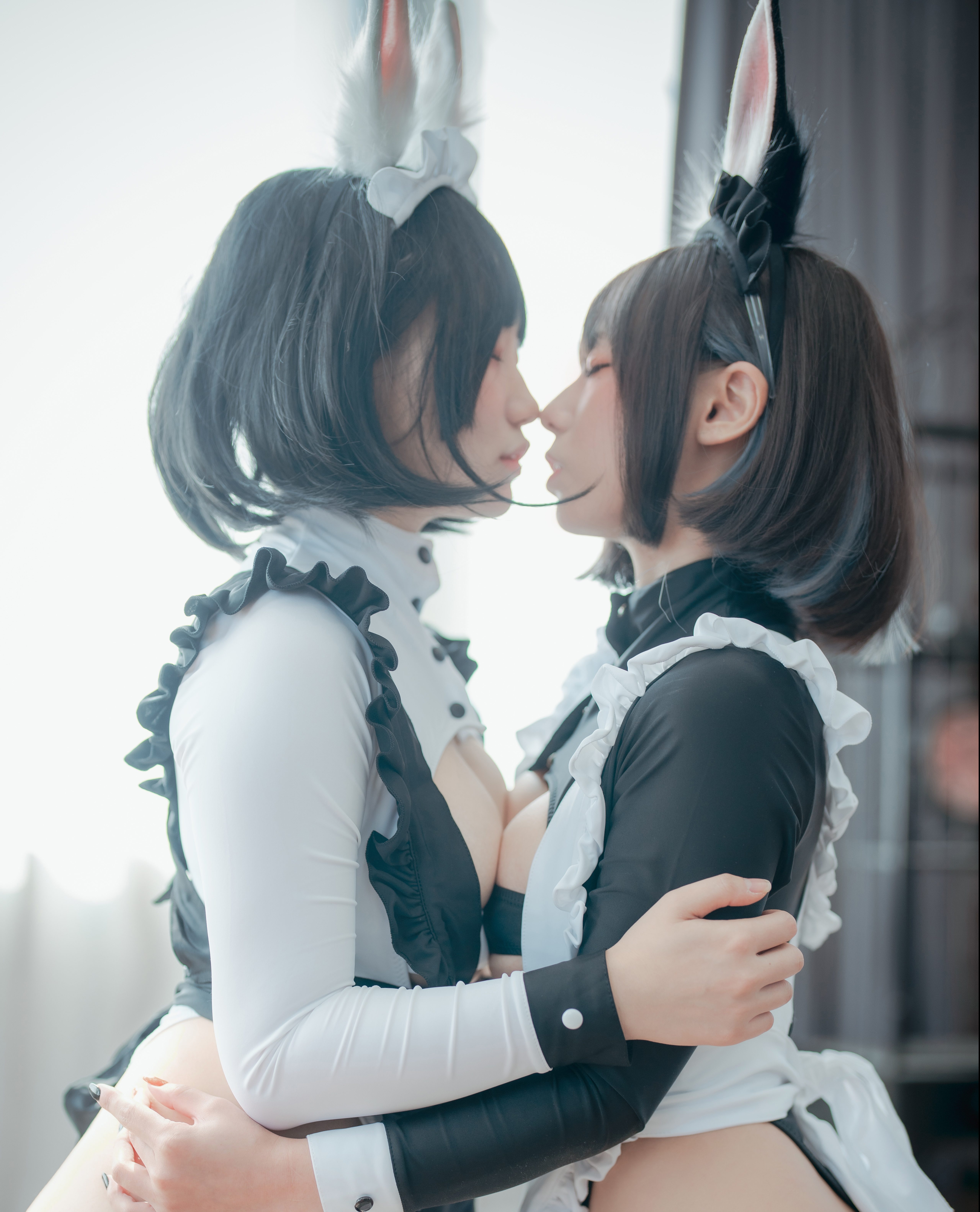