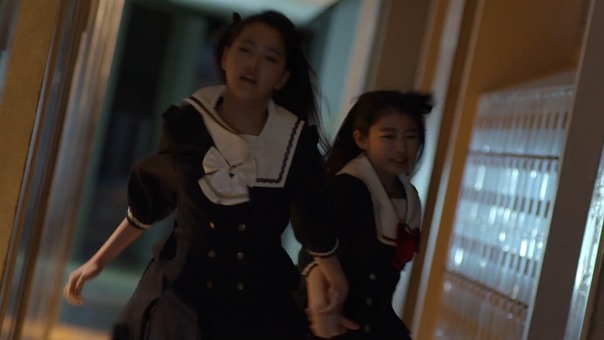 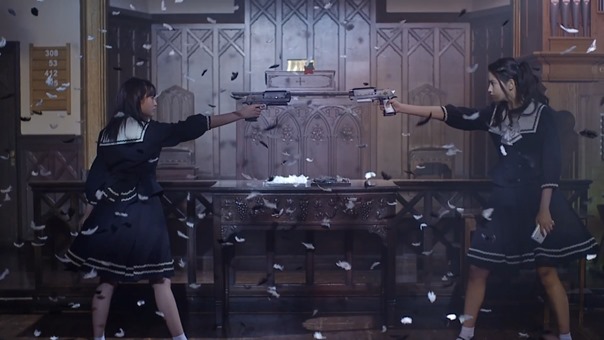 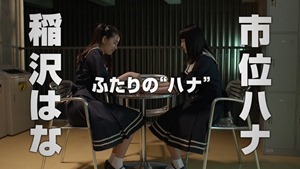 So there is this movie that is coming out soon and the first trailer just hit! I actually saw a poster for this movie not even a week ago on twitter and I was left wondering what it was! Since that is Kashiwagi Hinata of Shiritsu Ebisu Chuugaku, my first thought was that this was some kind of TV24 drama! This is the first time I have seen Hinata in a project so i did not think it was a movie because usually they start out on the small screen, well, the joke is on me it seems!

From what I can see, this movie is right up in my alley! Girls, yuri and guns, what could be better! If Bee Train was into Live Action, this is the kind of project we would expect from them! The story looks interesting but also there is signs of BAD END but I am inclined to believe in a GOOD END this time around despite all the tears, the bodies falling like sheep and those taglines of doom!

In the end though, HANDS always win and that was the case here too. Hands never let me down so I am believing in this movie giving a BEST END to Hinata and Seika and speaking of Seika, that is one unusual ‘DO! I have never seen like with that kind of hairstyle but she looks total badass for some reason with that uniform and a gun in her hand. The fact that she is pointing it at Hinata though, not so great!

More caps and the trailer after the jump…

END_OF_DOCUMENT_TOKEN_TO_BE_REPLACED 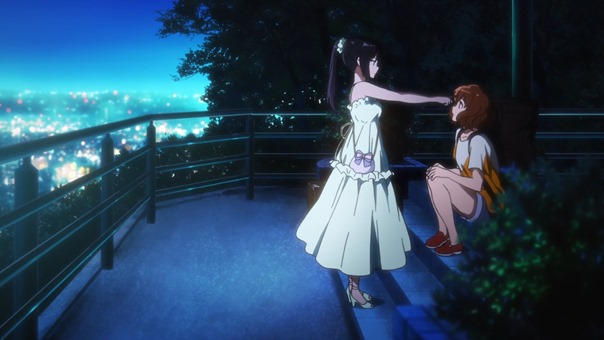 It’s like being drawn to something beautiful, despite your fears!

Um no shit Sherlock! That is exactly how we feel watching a KyoAni show for the yuri despite our fears of it being just bait, case in point this very series ‘Hibike! Euphonium’! But seriously, who can resist after what has come so far!?! Who?! Not me that’s for sure! And with the latest episode development, as promised here is the update since episode 1 all the way to episode 8! That episode was just glorious!

Sorry for the wait the few that were waiting for an update on this show. Very rarely do I write episode for episode in fact I don’t think I have done it before…have I? Any way most of the time I never come back to said series but this time, this time there was no way I wasn’t getting back to ‘Hibike! Euphonium’ after that last episode (episode 8).

Jeez, talk about taking things to the extreme! Everything about Kumiko and Reina in that episode was out of this world! From the very moment they appear together on screen you were bound to be at the edge of your seat looking at the screen wondering if what you are seeing is actually happening!

Ah but this talking is all about the last episode and this post is supposed to be about all episodes for far since episode 1 that I already wrote about. With that made clear let’s get back on track and follow all Kumiko and Reina’s interactions since episode 2. Really, no other is relevant in this series as far as I am concerned! I loved Asuka like all the others but then she lost me with only one line. I will tell you about it soon. And let’s not even get into Hazuki!!Sapphire is love of course but this is a story about Kumiko and Reina, and it is this fact that despite the evidence from the novels as I am being told, I have faith! Until someone comes and tells me that the novel was also about these two’s relationship with each other, like the anime is so keen on letting us know, what with those promo art taglines and the very progress of the TV series so far, I am inclined to still have the benefit of a doubt.

Sure there was some yurific scenes in the novels, sure the author went full retard by ending it in the safe zone by which I mean that she just gave up and let Kumiko end up with the Guy because she had all these feelings lying dormant inside her and all that crap! But from what I hear, the author had a different vision for her novel but the editors or whatever had to change things but that matters not, what matter is that this is not the novel and that the main focus of the novel is second to Reina and Kumiko’s story. From the very first episode Kumiko’s life course seems to have been impacted by an ice-berg by the name of Reina. She has made a couple of decisions already with Reina as the catalyst and even 8 episodes in, Reina is still impacting Kumiko’s life greatly!

There I got again, getting side-tracked! Let’s jump into this before I swivel off course once again…