When Marnie Was There 思い出のマーニー

I just lost my Studio Ghibli virginity and it has left me with a very odd feeling! Actually now that I think about it, though this movie wasn’t a part of those movies I said I was going to be posting about these coming days, I am adding Marnie to that list right now. This should tell you all you need to know about this movie before we even get started.

So, why now? Why am I only getting into Studio Ghibli movies after what feels like years since joining the Anime Community? Well, that is a very good question because Studio Ghibli was not for me so why did I decide to jump over-board this time? Well it might have to do with the fact that I was reeled in by the trailer, not to mention /u/ wouldn’t shut up about this during those trailer days so I figured I might as well add it to my wishlist.

Well, I am still debating whether that was a wise decision or not! But I will probably have made up my mind by the time I finish writing this post. And with that said, let’s get this thing rolling… 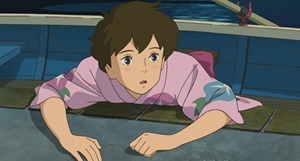 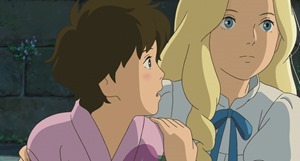 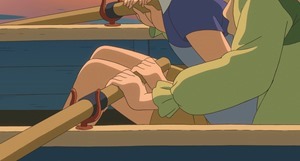 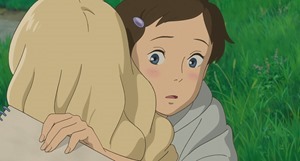 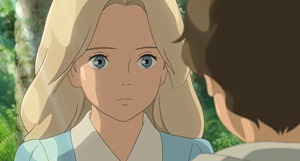 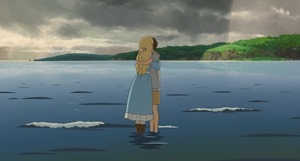 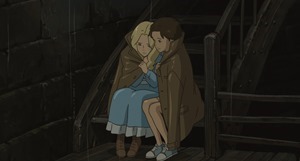 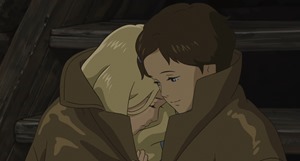 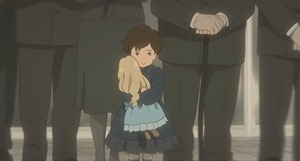 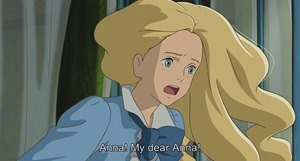 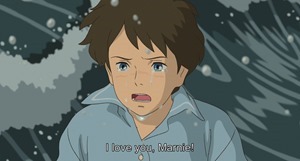 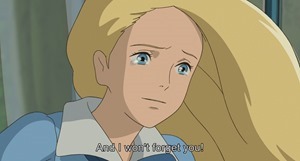 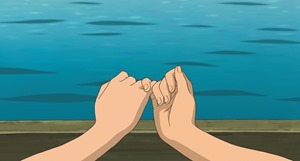 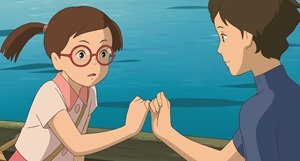 I can totally hear you dear Readers going ‘Look at all that gay! How could this possibly go wrong?’ Well my friends, it did, pretty fast actually, if you were a fast learner when it comes to seeing the hidden plot elements.

Now don’t get me wrong, everything started out pretty great. It was what the trailer promised us. Anna lives in the city (Sapporo) but she is sickly (Asthma). Her worried mother (who isn’t her blood mother but adopted parent) decides to send her to their relatives in the countryside where the air is clean so Anna could get better while there. Oh yes, Anna is 12 years old BTW.

While there, everything goes as planned and expected. There she gets to meet Marnie, a foreigner’s daughter who lives in the mansion off to one side of the lake. The two get aquatinted and decide to keep their meetings a secret from everyone, which was kind of strange seeing that Marnie, who proposed the secrecy, went ahead and introduced Anna to not only her parents but there was a party on at the time and thus to a whole lot of people! Kind of makes you question what secrecy she was on about, huh?

Anyway enter the cutest of moments between the two. Moments that would make anyone watching ship these two like they were the first ever official Ghibli couple! Marnie brought Anna out of her shell. She put the smile back on Anna’s face. She wasn’t afraid to be really intimate with Anna and in turn Anna grew somewhat bolder when she was with Anna. They really had some real good moments that I can just imagine fics already falling off the trees despite the reality of everything!

You see, I am 100% sure for this is my first Ghibli movie but I have a feeling that this movie had the elements that make a movie Ghibli in more than name of the studio. And after this, I don’t think I will be watching any more Ghibli movies, well, not until my yuri weakness is preyed upon once again! But even if that time does come again, I will be treading extra carefully! Not gonna fall for the same trap twice Ghibli, nope!

You see, I kind of forgot that Ghibli was like the Japanese version of Disney. But even still, this movie kind of took things to the extreme! Not even Disney would go that far! The last third of this went by me like a white puffy cloud in a windy afternoon! Things got so ridiculously dramatic I had to exercise all my restraints to not stop watching this movie! Everything went so out of control and at such an alarming rate that I was left with a billion question marks over my head and my jaw on the floor!

Korean TV has nothing on the amount of drama in that third act! Nothing!

The thing is that even before we got to the third act and things were made clear, or more confusing in my case, not in the plot getting confusing but my feelings about everything this movie! The thing is that before then, the shipper in me was already getting drowned. About half way, actually even before then, things were glimpsed of, things that creamed BAD END, when you caught those little things. Things that pointed to Marnie wither being a figment of Anna’s imagination, or some kind of ghost from Anna’s past, which doesn’t make any sense. Anna is 12 so she should remember Marnie if they had met before.

But I swallowed my fears and fought on. The two kept delivering great chemistry and wonderful moments to the point of blurring the lines again! But the more the story progresses the more doom I felt and still I pressed on! Even when the ghost rumour was proved true and Anna’s hallucinations were laid to bare, by her own words, I still pressed on, because there was like 20 or so more minutes left to go.

I had nobody myself to blame for what was to come next. For you see the whole mystery surrounding Marnie was revealed and I was lost as to what to feel! Sure it would have been sad if Marnie was just a ghost of a girls that died in that mansion on the lake side but what is new? I have been through so many BAD END yuri titles I have even lost count! One more couldn’t possibly hurt! So what exactly was revealed that was so terrible? Hmm terrible is not the right word, though some might see it as such, nah, they would rather be in denial than consider that possibility.

So what was it? Well get this, It was true that Anna had met Marnie before, when she was young, only a child. Well she is young now but I am talking 0-2 years young! Marnie was indeed the blonde girl, she lived in that mansion offshore of the lake but that was waaaay before Anna was even born. Marnie had a Japanese childhood friend with whom she got married and had a child named Emily. Emily’s father died of sickness and not being able to handle the loss, Marnie too went into a kind of sickness of her own and she had to leave Emily to live with someone else.

When the two got to meet again after Marnie got better, which was years later and Emily is all grown up, Emily wasn’t of course very happy with Marnie thinking that she had abandoned her all those years. Emily gets pregnant and elopes with her boyfriend but she soon has an accident! Yes, more feels just in case those you have had so far weren’t enough! But we are not even close to done! You see Emily had given birth to a girl, whom Marnie decided to look after and swore to never let grow yup being lonely. But having lost to parts of her life, her own parents, her husband, and then her own daughter, Marnie just couldn’t keep holding on and her body let her rest in peace, forever!

This left Emily’s daughter to be adopted by a family that was compensated by the wealth that Marnie’s family had. This daughter turn out to be Anna! Yes, Anna is Marnie’s granddaughter and Marnie is Anna’s Grandmother!

Here is a bucket friends, in case you need it! I know that feel you are experiencing right now! I have been shipping Anna and her Grandmother all through-out this movie and right there my mind short circuited for an extended period of time! Yes, I have done Godmother shipping with Princess Aurora thanks to Maleficent but I confess that this is uncharted territory even to me! So you can imagine my quandary of whether I should ship Marnie and Anna or think of this as a waste of time and never think of seeing another Ghibli movie. Then again I might not have to worry about that because from what I hear, this was potentially the studio’s last project, potentially, whatever that means!

But shipping wasn’t the worst thing for me. It was all those deaths! And since they were told in the span of 10 or less minutes, that’s a lot of feels for any person to feel, and this was supposed to be a kids movie, right? I mean Ghibli does family movies, doesn’t it? Also the road to getting there was so confusing sometimes. I swear at one point I thought that Marnie was a doll! You see in Anna’s old photos, she has this blonde doll with her that had the exact hair as Marnie’s. So up until after the moment when Anna said that Marnie was a figment of her imagination, someone she made up, I thought for sure that I was shipping a girl and her doll!

Okay, I mean I have shipped a girl and her doll before. There is this Korean movie called ‘Doll Master’ in which a Doll Maker collects abandoned dolls one of which had a soul of its own and was totally in love with its owner that was all grown up by the time the movie takes place. I actually kind of recommend it though it too was a BAD END (Because girls have to grow out of their dolls and all that) but again, what is new?

Going back to Marnie, even their farewell scene, Marnie and Anna I mean, was like Anna was saying her goodbyes to her doll that she had loved so much when she was young and had lost until it appeared to her in opal form to apologise for leaving her (a twist where the doll is at fault) and I was actually kind of happy with that. It was a touching scene and I thought it was perfect for a kids movie. But then the other bombs had to drop because not enough drama apparently!

So yeah, a Granddaughter and their Grandmother. Looks like Ghibli is following in Disney’s footsteps in tripping with our minds by making us consider these strange ships! I mean come on, that Marnie/Anna chemistry was glorious! Many will deny having shipped the two when the bombs drop in their faces but it won’t change the fact that they shipped! The whole of /u/ is already victim!

I am not one to talk a=because this movie has left me lost. One thing is for sure, No more Ghibli movies for me. There is only so much drama I can take before I have to close my eyes the rest of the movie and by the gods was there so much drama! They really should have stuck with Anna and Marnie and left Marnie as Anna’s doll spirit or something. That would have been much better!

Now to wait for that Frozen Fever and the rumoured sequel! If Disney turns tail and decimate our Elsanna though, volcanos will be activated! Mark my words!

6 thoughts on “When Marnie Was There [Ghibli-Movie]”