So, as you know (if you read my last post that is) I was waiting for a different view on the Elections. I wanted to know who Yukirin was waving to when she made her way to get the trophy. I wanted to see her reaction when Mayuyu passed by her to get to the throne. I wanted to see Sakura’s and Rena’s reactions as Yukirin passed by them to get to her seat (because she had to get past them).

The BS Sky version robbed us of this but we got something worth while in the Fuji TV version. Of course it wasn’t enough but I am happy with what I got. Better than nothing at the very least!

Ignoring those caps above that are screaming at me to make Yukirin the next Top, being surrounded by No.1s left and right, My eye caught a couple of interesting things at the elections. And funny enough I got what I wasn’t looking for. take a very good look at these caps…

This was when Yukirin was taking her seat! Who is she talking to? That’s Yuihan! I am willing to bet too that it was her that she was waving at. Looks like Yuihan wants in on the Yukirin World that is about to befall us all. It was actually quite a DAWW moment for Yuihan to show how happy for Yukirin she was. Are you sure about that though Yuihan? Your Jurina and Paruru are watching, you know!

But, but! While that is all good in and of itself, and while it was great to see Rena stand up as Yukirin passed by her, really you didn’t have to do that Rena, but you did! So thank you Rena-chan. And fight! Do not loose to Yuihan!

While that was all good, let’s take a moment to look at Sakura on the far right! You probably aren’t seeing it right now so  I won’t say anymore on it but remember it. 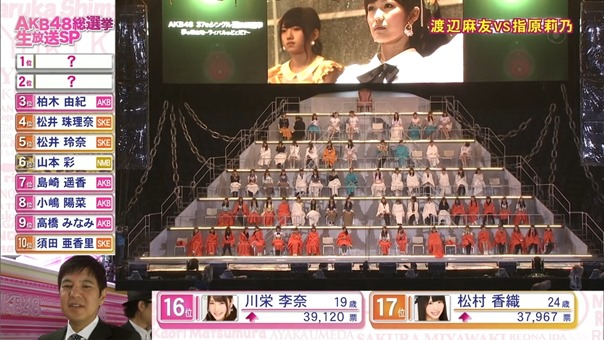 As if she was reading my mind, as soon as Yukirin settles into her seat, Rena doesn’t waste even a second before grabbing her chance and capturing all of Yukirin attention. Even as the lights dim for the most awaited moment of the day, of the whole past year really, Rena does not stop! She is on fire! I am really dying to know what she was talking to Yukirin about!

I mean it couldn’t have simply been congratulations. That was too long a convo for something as small as that! What’s even more surprising is that fact that it was Rena who started it! I mean they are both loners but Rena is the worse of the two by a large margin. So to see her do that was…You are lucky you guys can’t see my face right now, let alone when I first saw this!

Then of course the moment I was most looking forward too. And I was not disappointed. Well, I was but also kind of expecting that disappointment. As Mayuyu took to the throne, Yukirin’s eyes were on her from the moment she started climbing the pyramid!

I was kind of sad that they did not show the complete version of when Yukirin first found out that Mayuyu had conquered the top but at least we got to see her watch Mayuyu take throne. And as expected Yukirin’s eyes were all for Mayuyu! If she could I have a feeling that she would have dissed her seat ad embraced Mayuyu right then and there! She craned her neck left and right, following Mayuyu all the way to the throne!

And my heart was pounding thinking that if Mayuyu were to turn even just a little and make eye contact with Yukirin, it would be the death of me! But alas, Mayuyu totally disappointed me by not sparing Yukirin even a split second of time! Of course I know she wants to. I know that she is holding her self back for the image. Actually I don’t think she looked at any member there so that confirms my excuses. But still, it is Yukirin. The world would not have ended if she had expressed some kind of gesture towards Yukirin. if there was any member there that was 100% happy for her it was Yukirin (and Takamina of course). But alas…

And that wasn’t the end of the disappointment. Even as we were taken backstage, we did not get any Mayuki at all. I mean it would have been awkward I guess, showing us a very happy Mayuki right after having showed Sashiko and Milky in their worst state so far as they broke down but still. Oh well, there is always the DVDs about the event. I will wait for those to get my dose of Mayuki. Now then… 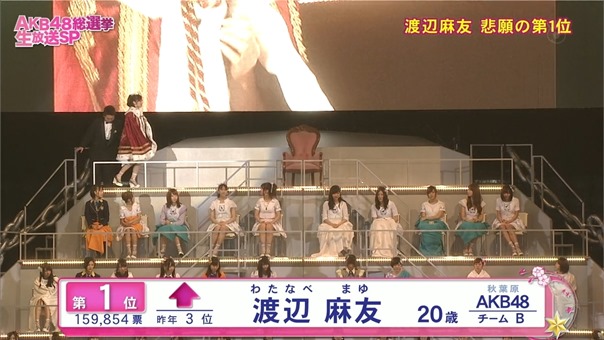 At least Yukirin had Yuihan and Rena to soften the blow, even if to her Mayuyu’s cold shoulder would have erased the other two’s efforts but it is nothing at all like how Sakura-tan must feel.

You know, I even have a feeling that Yukirin totally ignored her as she passed by her there. With Yuihan all so physically happy for Yukirin and knowing that Sakura-tan probably was to shy to raise a hand or even try and grab Yukirin’s attention at the time, Yukirin would have had her eyes on Yuihan more than the person she was standing right next to.

The way things are going, I am expecting to see the change in Sakura in regards to her actions towards Yukirin the way that moving Mayuyu to Team A made Yukirin change her actions towards Mayuyu. One of these days Sakura will start publically showing her feelings towards Yukirin, if she hasn’t already with this. One can only play the fool for so long before they can’t hold the heavy glass barrier up anymore.

I was so not expecting this new information I got so I am very happy and glad that I sat through more than 8 hours of the same programme. Ah but there is one last thing before I go…

God, I never thought really that you were unfair until now! How can you make a being boundaries apart from other beings!?! Look at Sayaya’s cuteness! No one should be that cute! This is madness! Even as cute I think my Goddess is, next to Sayaya she might as well be a mere mortal sitting next to Aphrodite!

And this is not the best angle to see her. The best is when you are seeing her right head on. When her ears are both visible, they frame her cute head in way that even the best artists in history could never sketch a more being!

And of course her sitting right next to Yukirin hit me right in the plexus! All kinds of scenarios were flowing through my mind as I watched these two sitting there next to each other. If you see a short fic about these two in this exact moment, do not be surprised. I am just saying.

And that name too – Kawamoto Saya. As soon as I heard it during the drafting, I couldn’t get it out of my head. it was the first name from all the Draft members that I remembered and never ever forgot even once.

Nope, I will never be forgetting that. Never! And her voice too. Her manners. Her performance skills! This girl is really something. Seriously!

Which is why I was really disappoint that she did not rank. I mean she is still young both physically and in the context of being a member so she is only just starting. Having only stood on stage times that can be counted of fingers so far, it wasn’t that unsurprising I guess. But next year and beyond I have a feeling! Now if only they would just put her on the shows like AKBINGO or something. People need to know more about her.

oh and apparently, her countryside manners, lovely voice and performance skill aren’t the only thinks she has in common with Yukirin. She apparently also has a connection to the dark side of the force within her. Aeri has made it her mission to it out to the world and other members of Team B seem to concur. Of course we have yet to see it which is why I want her to appear on TV and gradually release this side. Gap characters like these are very rare. I mean you would never think it even I am still a bit sceptical because there is nothing about her that give away the darkness within. Nothing at all! only way to know is to see it for yourself. And if she doesn’t appear on TV, we shall not see it. She doesn’t bring it out even on stage after all but I have a feeling things would be different on TV.

Well then, till next time.

5 thoughts on “Sakura, you jelly?” 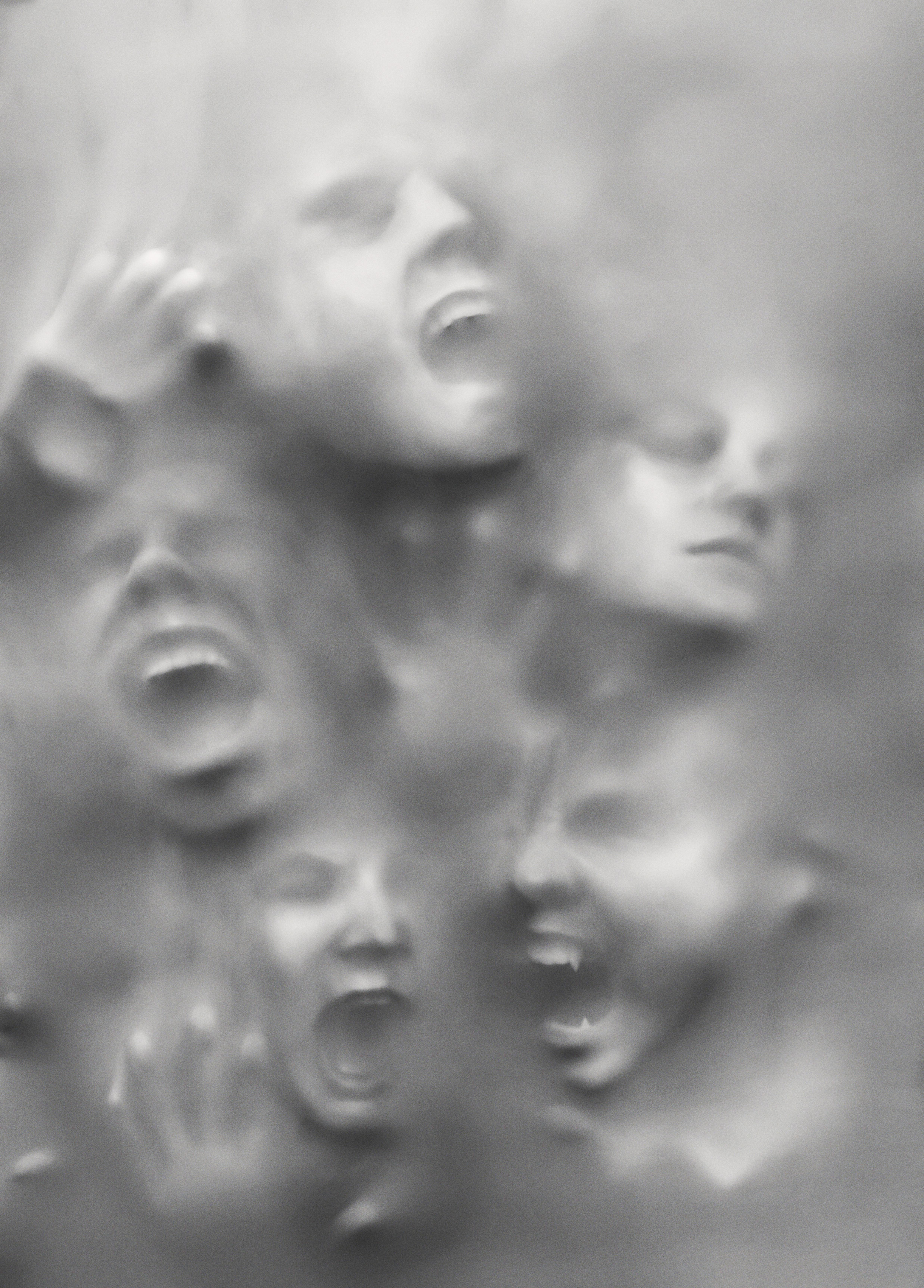