I don’t believe it still! Sayanee’s reaction LOL. Looks like even now nobody knows WTF they were thinking doing it! Can we all agree that this was the only time Sayanee kissed someone? unless of course I am totally missing something. Really though, denying these two’s connection is just incomprehensible! What a way though to end our Sayacchu? I mean not that this is the end but we all know what distance does to couples. Even if Sayanee is a Team K intern and usually is in AKB singles as Senbatsu, they still won’t be meeting usual as they were during NAMBA.

And probably someone has noticed but I have changed Maachun’s place in the tags to AKB48 since it is all over. She is no longer NMB48 now. Even TV programmes are labelling her as AKB…

Sad, sad times. Not to mention that she has already had her send off/last Team N performance already and a birthday/send off party. Which by the way Sayanee did not attend? Like WTF Sayanee?! That was what I was thinking when I started watching that YNN episode and she was nowhere to be seen. But of course she explained herself in her video message she sent Maachun. Yes, it’s the same video in which she confesses to the world how she and Maachun kissed during the Kinki Concert tour way back in 2012. Umm sorry to break it to you Sayanee but the whole world knows! Then again, it was probably aimed towards the members who knew nothing of it.

Maachun though, how much is that girl loved?! Seriously! One would think she was graduating the way Namba management and the members were treating her! I swear I am still baffled by this mystery surrounding Maachun and the fans! She is so obviously loved in reality but when it comes to things like Senbatsu voting its the exact reverse! I don’t get it! What is really going on? I mean even management don’t hate her that much. Seriously every single single since Oh My God she has had that real centre spot in each and every one of them. And by Centre I don’t mean the front centre, I mean real middle Centre. you know, like the position Acchan had in the early days? Remember? No? 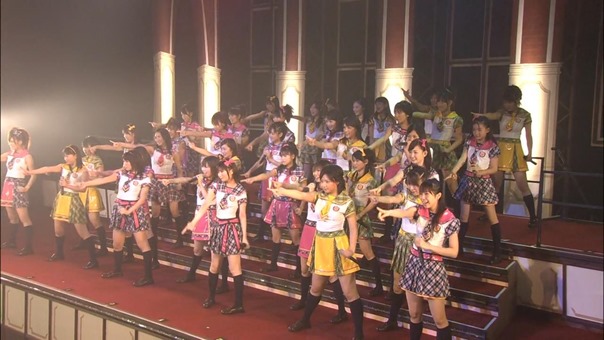 There it is! That is the position Maachun has right in the middle of Sayanee and Milky and to me, that is the real Centre! While the masses are split between looking to the left or right for SayaMilky, Maachun is right there in the middle like a BOSS! But alas, all that is over now. Seriously if not for Yukirin moving to N, I don’t think I would have stayed over there. Damn those smart bastards! 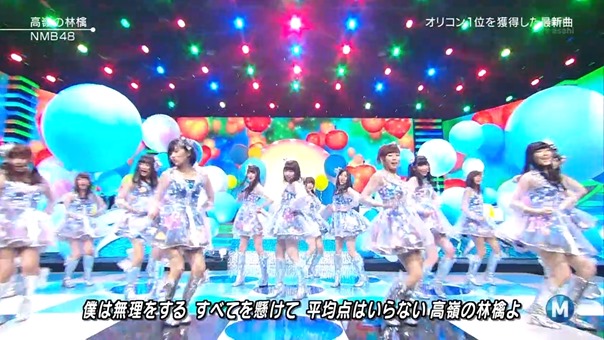 Damn it, Imma gonna miss Maachun in NMB. She was really a great existence in there and if anyone didn’t appreciate her, I have no words for them really. I have not felt that a member was essential to a team since Takamina and Yukirin to their respective Teams so while I am pretty stocked that she is in my favourite Team since the ice age, she really defined NMB for me. That’s right, not SayaMilky but Maachun. Those two are like AKB’s representatives to Namba while Maachun is the exact opposite.

Oh well, things happen and all we have to do is try to adjust lest we lose our way and wither away. I love Team B, and now my Kami has gone to N so my two favourite Teams are still my top two favourite teams. Speaking of new Teams…

That is Team B’s song title for the summer single guys! B is still taking all the attention when it comes to titles. B Garden?Seriously? More like Garden of Eden! Damn you Yasusu! Just make the song good to take another title of best Team song and we are good. Though I doubt it. We will probably have to wait until the new stages to get a Request hour topper B song again.

5 thoughts on “Sayanee has a confession to make!”