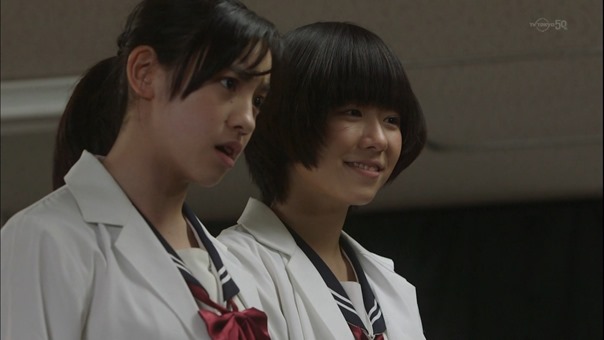 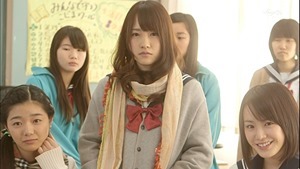 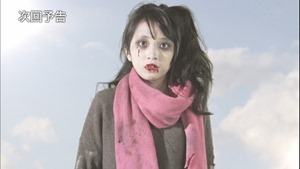 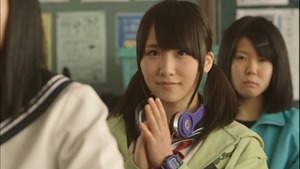 God YES! Shipping with the Power of Ra!

Feels like forever since we got a Majisuka Gakuen! and while Sailor Zombie is no MG, with the way things are looking, it might just as well be Majisuka Gakuen ~ Story of Side B – The Zombie Apocalypse! But first I gotta give thanks to the good Lord out there for deciding on Owada to lead this thing because if it has been any of the 3 Over-hypedsteers I swear to God I would have…

Seriously though, it’s just because she is in B now but ever since I saw her surprise Centre Show is Over, a song that is actually pretty good, to me anyway, I was so blown away by her! The way she felt fit in that position still shocks me even now! I have no idea why they went for the 3 whatevs because except for Mikichan, I really don’t see the charm in the other two. Nana is okay because of her ‘personality’ as I love quite and serious girls like her but they are all really just not…And I am getting derailed again.

Going back to Owada Nana, I am really glad she was chosen for this! And the choice of Juri co-starring alongside her was another jackpot! I was seeing a lot of pics of these two lately on G+ and I was wondering what was going on. Surely it wasn’t just because they were both now on the same Team (Ah Team B, how much more awesome can you get!). Turns out this was the reason. They had been shooting a new 48 drama!

But 48-only it is not! And of course the first face that popped out to me was none other than Koike Rina! If any of the girls in class are members of the 48 sisters, I apologise but I don’t know them! Kawaei is also in this and girl, What a bitch-y character she has! She was out to get Nana from the very moment they met! Nana hadn’t even spoken a word dearest Kawaei was already showing her the way out! She even resorted to buying nana’s exit. She would pay her if nana would just GTFO!

There are other members as well. Like Mayuyu, Yuihan and Karen being in some kind of Zombie Idol unit or some thing! They are like Nana’s fairy friends or something! Then there is Souchan. She is apparently the –kun of the Zombies in this hood yo! Yes, she is as huge as a titan! Apparently zombies in here get that big! Yeah, crazy huh? But really, since when does AKB dramas make sense? Even the apparent realistic Sakura kara no Tegami had its WTF moments so really, when it comes to AKB dramas, I just sit back and enjoy the show! And since there is bound to be the GAY FORCE then really, I have no choice! And speaking of the Force, my senses were tingling like crazy!

END_OF_DOCUMENT_TOKEN_TO_BE_REPLACED

Looks like the year ain’t over yet dear Readers, for a few days ago a new trailer hit about FLARE, a production of both France and Japan. That’s right, France and Japan! Just take a moment to absorb that information in and you will realise why I just could not help but get hyped about this!

But of course while the prospect of France and Japan working on a movie is all kinds of mind-blowing awesome, that alone shouldn’t be enough to rile this soul of mine. Nope, what really reeled me in was Alice Hirose and Fukuda Mayuko!

I have a feeling, you it all to well and anyone who sees the trailer (right after the jump) will have it too but I just do not care! These alone in the same movie would have been enough but for them to actually have THAT chemistry…My soul is yours I say!

I really, really love these two. And from what I have seen in the trailer, they are still at the top of their game. I really do not know why but I love them so much. I mean it might make sense in the case of Alice because I have seen a good deal of her works in the past few years latest being just last years’ Zekkyou Gakkyuu starring Kawaguchi Haruna-sama. And just like that time, she is kind of crazy this time around too. I guess she just has a thing for crazy characters. And seeing as I see her most in those, then I guess so do I since I love her.

Mayuko on the other hand, I guess it’s more because of the deja vu effect. I haven’t seen any of her work for like, years! And by years I mean years!!!! The last time I saw her she was just a little thing in Amami Yuki and Shiida Mirai’s The Queen’s Classroom. that was way back in 2005 I think. Damn, that;’s almost ten years! I feel so old all of a sudden! Here is what she looked like back then… 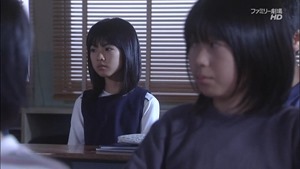 But now she is all grown up! And seeing her now I am hit with a curious emotion of nostalgia. I really love that drama, even now I still go back to it from time to time. Japan has been letting me down in the drama department lately!

Any way I am so psyched to watch this movie! It looks like it’s gonna be as deep as all hell but I love me some mind-bending plots as well. As said before, it won’t be all sweets and sugar and everything nice. I have a feeling I will cry at some point when watching it but too much sugar isn’t good for anybody any way, am I right!